No ritual burial for bin Laden

No ritual burial for bin Laden 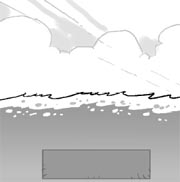 Pashupatinath Temple in Kathmandu, Nepal, is one of the four sacred places of Hinduism. The god of destruction, Shiva, is enshrined there, and it is situated on the Bagmati, the upper reaches of the sacred Ganges River. Outdoor cremations are held there every day. Followers of Hinduism believe that they can rid themselves of the endless cycle of birth, death and rebirth and attain eternal life if their ashes are scattered in the Ganges. The riverside is full of half-burnt firewood and corpses. To deal with that, the environmental organization Friends of Bagmati was founded in 2000 to clean up the area.

In Korea, King Munmu of the Silla Dynasty was buried at sea. His tomb was created according to his desire that his spirit become a dragon and protect the state, which would happen if his body were cremated and his ashes spread in the East Sea. A flute that is said to have calmed the raging waves is the one that was played to call the spirit of King Munmu.

Sea burials were common among maritime people. In Polynesia, they have a tradition of loading the body of the deceased onto a boat and sinking it deep into the sea, representing the concept that a human being born of the sea goes back to the sea. In Tibet, there is a custom of wrapping a dead body with leather and throwing it into the river if disease was the cause of the death. This grew out of their belief that a wicked spirit cannot return to this world if the body is thrown into water.

Osama bin Laden, the mastermind of the 9/11 terror attacks, was buried at sea to eliminate the possibility of his burial site being used as a sacred place by terrorists, as the tomb of Che Guevara in Santa Clara, Cuba, is. It was also done to prevent the “specter of terror” from coming back.

The Chinese have a tradition of eating rice stuffed in bamboo or wrapped in reed leaves on May 5 of the lunar calendar. This custom originates from a folk legend about Qu Yuan, a beloved scholar from the Warring States Period who jumped into a river. According to the legend, people threw rice wrapped in reed leaves into the river to distract fish from Qu’s body. It is also said that the act of racing to search for his body in boats evolved into the tradition of dragon boat racing.

For bin Laden, however, there was no throwing of rice or dragon boat racing. All that remains is the terrible memory of the terror attacks and his despicable reputation.