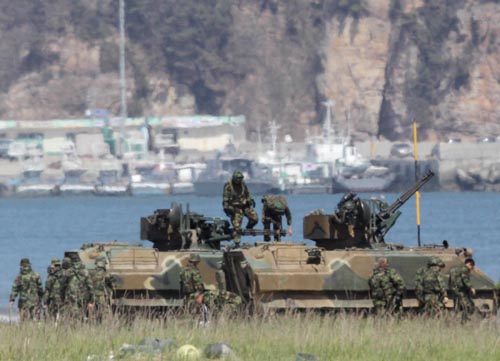 
Seoul and Washington are increasing their joint military presence near South Korea’s so-called five western islands near the Northern Limit Line, raising speculation of a shift in the focus of the United States’ defense on the Korean Peninsula to the islands near North Korea. According to the South Korean military, the South’s marines conducted a live-fire drill near Baegnyeong Island and Yeonpyeong Island yesterday and around 10 U.S. military officers observed it.

Seoul and Washington are also planning a joint military drill on Baegnyeong Island in mid-July that will focus on deterring North Korean attacks. The drill, which will involve both countries’ marines, will be the first-ever joint drill on Baengnyeong Island, Seoul military officials said.

“They are follow-up measures to American and South Korean plans to strengthen deterrence against [North Korea’s] provocations,” said a South Korean military official.

Last December in Seoul, Gen. Han Min-koo of South Korea’s Joint Chiefs of Staff agreed with U.S. counterpart Adm. Mike Mullen on the need to refine the U.S. support plan in order to respond to further North Korean attacks. The five western islands were speculated to be the venues for the strengthened anti-provocation drills.

The five western islands, due to their proximity to the Northern Limit Line, the de-facto maritime border, has become a target of North Korean attacks. The North shelled Yeonpyeong Island on Nov. 23 last year, and in March last year, the warship Cheonan was sunk near Baegnyeong Island.