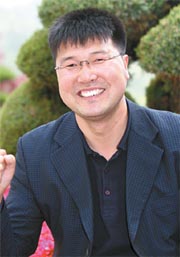 When the Hyundai Capital Skywalkers failed to reach the final of the Korean Professional Volleyball League (V-League) this year for the first time since the team turned pro in 2005, it was a wake up call for the organization.

Head coach Kim Ho-chul brought two V-League championship trophies to the Skywalkers in his eight-year tenure, but falling to archrival Samsung Fire Bluefangs this year proved to be too much for the team.

As expected, the Skywalkers announced on Tuesday Kim’s departure as coach and appointed him as team director.

And for its new coach, the team decided to go with former franchise star Ha Jong-hwa, who spent 11 years as a player and assistant coach for the Skywalkers.

In the 1990s, Ha was a superstar, bringing women to the stands with his talent and raw handsomeness. Before that, he had already been a mainstay on the national team when he was a Hanyang University student. When Ha was a senior, he won the MVP at the 1991 President’s Cup amateur volleyball championship.

Ha’s popularity grew in 1992 when he joined the Hyundai Motor Service amateur volleyball team, now known as the Skywalkers, and led the team to two amateur championship titles before his retirement in 2000. He served three years as an assistant coach.

After eight years of coaching at Jinju Dongmyeong high school, Ha returned to his professional team. He said he always considered coaching the Skywalkers, but didn’t expect that the opportunity would present itself so soon.

Ilgan Sports, the JoongAng Ilbo’s daily sports newspaper, sat down with Ha on Tuesday to talk about his new role as the Skywalker’s skipper.


Q. How does it make you feel to coach your old team?

A. I am glad I am returning as head coach with the Skywalkers. But honestly, I am half worried and half excited.

How did you react when you were offered the job?

I received the call last month, but I had to think it over because about 30 young players were following me at that time. I was worried about those players, because I told their parents I would take good care of them. I couldn’t leave those young boys, but after long consideration, I decided to seek forgiveness from their parents.

What is your evaluation of the Skywalkers?

Well it’s different when you examine the team from the sidelines or behind the bench. I will try to manage things one step at a time.

How will you overcome your new team’s main rival, the Samsung Fire Bluefangs?

I cannot say anything on this point, except that I will build the team step by step. It starts with the basics, such as cooperation and consideration. I want to build a team with team spirit that erupts like a volcano.

What’s your take on how to attract more fans to the stands?

I hope volleyball fans turn up to see our team (rather than to see me). If we play a game that’s fan-friendly, the fans will come.

What does your near-term schedule have in store for you?

The National Division Volleyball Championship continues through Sunday. It is my final tournament with the boys, so I will try my best to get a good result.