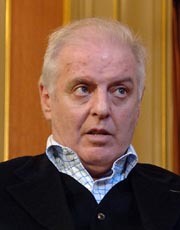 Israeli conductor Daniel Barenboim and an orchestra of prestigious European musicians on Tuesday played an historic concert in Gaza, drawing rapturous applause as they performed in a show of solidarity and peace.

It was the first time such a large group of celebrated classical musicians had played in the Hamas-run Gaza Strip, which has been largely sealed off from the rest of the world by an Israeli blockade for nearly five years.

Hundreds of first-time concert-goers, including scores of teenage school girls, packed into a sea-front hotel in the northern town of Beit Lahiya to hear the performance by the “Orchestra for Gaza” - a 25-member ensemble put together especially for the occasion.

The “peace concert,” which was organized by the United Nations Agency for Palestinian Refugees, marks the first time that Barenboim, a tireless campaigner for peace between Israel and the Palestinians, has managed to get into Gaza.

As the audience settled into their seats before the show, players from five of Europe’s best known orchestras stepped onto the stage to tune their instruments under a blaze of twinkling fairy lights.

More than 300 people had been invited to watch the performance, with many in the audience admitting they were thrilled to be there and heartened that an Israeli had chosen to come to Gaza.