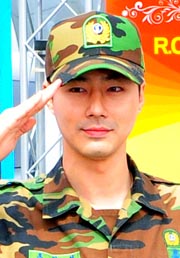 “Even at this moment, I think it was great for me to have served [in the military],” he said in front of 400 fans and the press at Osan Air Force headquarters in Pyeongtaek, Gyeonggi.

Popular with the ladies because of his height and handsome looks, Zo was forced to leave the film industry to serve his mandatory military service immediately after being featured in the 2008 hit film “The Frozen Flower.”

Zo enlisted in the military in November 2008 and also served in a military band.