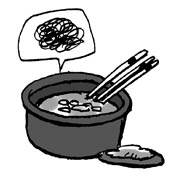 Korea has become a country full of famous restaurants, mostly thanks to television programs that focus on delicious food. Television scenes in which customers give a meal a thumbs up while restaurant owners flash a broad smile across their faces have become familiar to us. Restaurants fortunate enough to be shown on national television have a constant flow of visitors. There is no shortage of smartphone apps introducing famous restaurants.

More often than not, however, people are disappointed when visiting the restaurants shown on television. In reality, really good restaurants are rare. At present, though, three network television stations broadcast over 10 programs focused on restaurants. If each program introduces five restaurants per week, over 780 restaurants are shown each year. So the question is, do these so-called famous restaurants deserve such praise?

A new documentary that seeks to answer that question is getting rave reviews. “The True-Taste Show,” screened at the Jeonju International Film Festival, starts with the narration: “I know why food served at restaurants featured on TV programs is tasteless.” The film’s director opened a restaurant himself and filmed the negotiation he had with a television program in order to be shown on it. Not surprisingly, the network asked for a fee.

The True-Taste Show reveals the restaurant programs to be frauds by uncovering collusion between restaurant owners, broadcasting stations, advertisement agents, subcontractors and brokers. It even claims that actors and actresses feigning as customers appear in such programs.

The Michelin Guide is considered to be the best restaurant guide in the world. Its authority derives from an impartial judging process and fair assessments. Plain-clothed food critics visit restaurants five to six times a year to taste the food and beverages served there. On the basis of taste, price, atmosphere and service, they make strictly impartial judgments. This is why the Michelin Guide has been successful for over 100 years.

People who watch Korea’s restaurant programs wrongly assume they maintain a certain amount of integrity. After learning of the trickery employed by the networks, viewers feel a sense of loss. When money is exchanged for publicity, it is fabrication. Those responsible should be punished immediately.