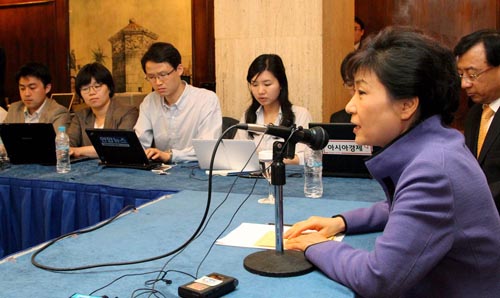 Park Geun-hye, right, former chairwoman of the ruling Grand National Party, talks with reporters in Athens, Greece, while she is visiting European countries as a presidential envoy. “I think I may work on more positive lines next year as there are important elections coming up,” said Park. This is the first time since July 2009 that she had such a meeting with reporters, right after she visited Mongolia. She toured the Netherlands, Portugal and Greece as a presidential envoy to celebrate the 50th year of Korea’s diplomatic ties with the three European countries. [YONHAP]