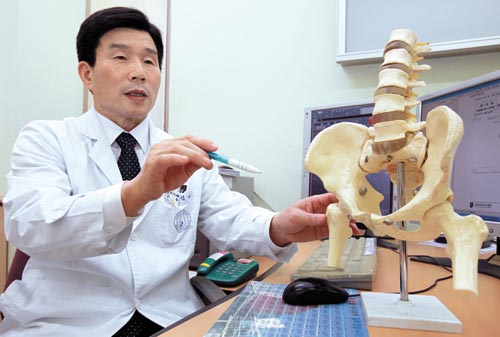 Kim Sung-kon, a professor specializing in orthopedics at Korea University’s Ansan Hospital, talks about his artificial hip bone. Provided by the hospital


After 15 years of work, Kim Sung-kon, a professor specializing in orthopedics at Korea University’s Ansan Hospital, succeeded in developing an artificial hip bone.

“Professor Kim has been developing an artificial hip bone sponsored by the ministry and the Korea Health Industry Development Institute, which has been pushing ahead with the G-7 project of Health and Medical Technology Development,” said a Ministry of Health and Welfare spokesperson on April 29.

Kim received approval from the U.S. Food and Drug Administration (FDA) in February.

In August last year, Kim’s artificial hip was approved by the Korea Food & Drug Administration for commercial use. The product was approved for inclusion in the National Health Insurance Program, going into effect by early June.

It is a significant achievement considering that commercialization is rare for government-funded research and development projects.

Kim’s artificial hip has also been recognized for its excellence. “After comparing the attrition rates of Kim’s product with four American ones at an artificial joint testing lab in Germany, Kim’s had an attrition rate 18 times lower than the American products, which means that it lasts longer,” according to the ministry. Kim’s product uses the same materials as the American products.

In 1995, Kim started research into the development of an artificial hip. “As Koreans engage in a sedentary lifestyle, and also because they have a different hip shape [than foreigners], imported artificial hip bones wore out quickly and broke easily,” said Kim. He set out to develop a Korean product that had a lower attrition rate.

To achieve his goal, Kim decided to study structure analysis at Stanford University’s School of Bioengineering. In 1999, his project was selected to be sponsored for three years by the Ministry of Health and Welfare. He received further funding from the Small and Medium Business Administration and the commerce and finance ministries.

It took Kim eight years to receive an approval from the KFDA. “I went through dozens of alterations and rejections and engaged in clinical trials on six patients,” said Kim.

Kim finally succeeded in receiving approval in Korea before winning approval from the U.S. FDA four years later. “There were times when I wanted to give up,” Kim admitted. “When I was stuck, I snuck into factories of American artificial hip bone makers to examine their products.

“I hardly slept five hours a night because I was a surgeon by day, and by night I worked as a researcher,” he said.

Kim said he would have given up if he didn’t have firm resolve that success was achievable.

The professor also developed a product for foreign patents and will promote exports to the United States, Mexico, India, Turkey and others.

“The U.S. FDA’s approval of Kim’s product will increase demand for Korean health care products overseas, which will vitalize exports and achieve an import substitution effect,” said Jung Eun-kyung, chief of health industry and technology at the Ministry of Health and Welfare.

Kim is a graduate of Gyeongseong High School and Korea University School of Medicine and is currently chief of Korea University’s artificial bone joint center in Ansan Hospital.