The minister of unification and minister of justice were not replaced, though they had been expected to be. 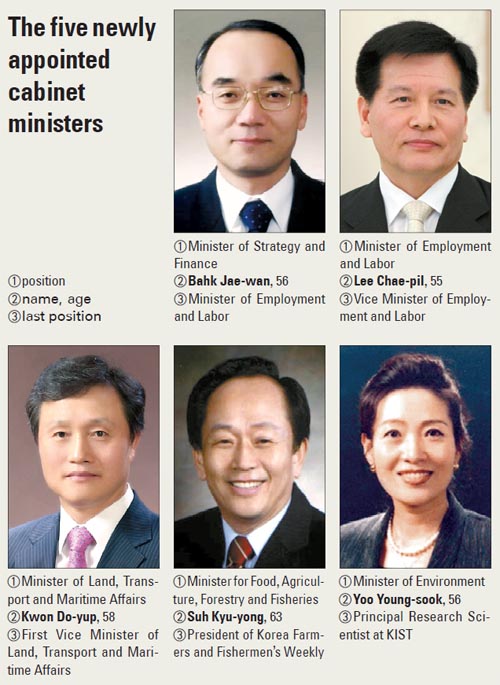 The new lineup came as a surprise for many as the selections and posts were different from earlier expectations and leaks. Blue House and other government officials had initially expected six posts to be changed, but Lee stopped at five.

The shuffle came just before Lee starts a European tour on Sunday, and, according to Blue House officials, the president’s deliberations were lengthy and the names not confirmed until the last minute.

Government officials said a dearth of candidates with enough experience made the shuffle particularly difficult for the president, who has been under pressure since the GNP’s loss in the by-elections on April 27.

Bahk Jae-wan has been labor minister since last August and is from Masan, South Gyeongsang. He has been considered a close adviser to President Lee Myung-bak: he was Lee’s senior secretary to the president for state affairs planning at the beginning of the president’s time in office. He was also a lawmaker for the ruling Grand National Party from 2004 to 2008 and served on several committees of the National Assembly, including the Health and Welfare Committee.

Replacing Bahk as labor minister is 55-year-old Lee Chae-pil from Ulsan, who has been vice labor minister since March 2010. His work on labor issues dates back to 1982 and was a Blue House official for labor in the early 1990s.

Kwon Do-yup, minister-designate of land, transport and maritime affairs, has been a member of the National Academy of Engineering of Korea since January. He served as first vice minister of the land ministry from March 2008 to August 2010 after leaving his post at the Korea Expressway Corporation, a position he held from 2007. Before that, he was an official at the Ministry of Construction and Transportation, the Land Ministry’s earlier name.

Suh Kyu-yong, from North Chungcheong, will be leaving his position as president of the Korea Farmers and Fishermen’s Weekly News, which he has held since July 2006. He was also the vice agriculture minister from February to July 2002.

The new environment minister, Yoo Young-sook, a principal research scientist at the Korea Institute of Science and Technology, was selected to succeed Lee Maan-ee, who will be leaving the position he held since March 2008.

The 56-year-old Yoo graduated from Stanford University School of Medicine in 1989 and has been at the institute since 1990. She also served as the director of the Korean Chemical Society in 2008.