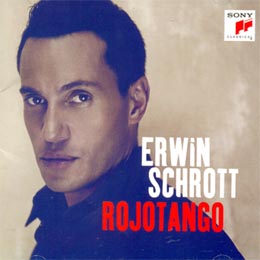 Erwin Schrott, a handsome young Uruguayan bass-baritone, says that for South American people like him, tango music represents their identity. His latest album “Rojotango,” meaning red tango, shows just how enthusiastic he is about his roots.

Also known for being the husband of one of Russia’s most esteemed sopranos, Anna Netrebko, Schrott is also keyed into the world of opera. He once said that singing tango and singing opera may be technically different but they have many things in common and that tango is like a three-minute opera.

In “Rojotango,” Schrott covers a wide range of the tango repertoire - including five classical pieces by Astor Piazzolla and others by Brazilian masters such as Antonio Carlos Jobim and Egberto Gismonti. The songs, while meticulously fluctuating in tempo and mood, evoke various emotions - from passion and loss, to anger and love. The title track makes a particularly strong impression with Schrott’s dramatic voice soaring over a rhythmic melody.