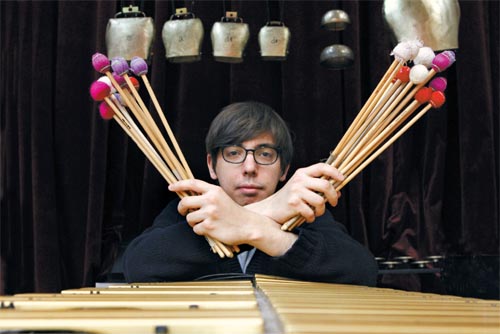 
Take a close look at the Seoul Philharmonic Orchestra on stage, and you’ll spot more than a dozen non-Korean members playing anything from the violin to the trombone.

One of those foreigners, who account for 6 percent of the Seoul Philharmonic Orchestra, is Adrien Perruchon, principal timpanist from France. He is the one who stands at the far back of the orchestra, keeping silent most of the time, but renders impactful and highly sophisticated sounds when his turn comes around.

The maestro was then freshly appointed to the position at the Seoul Philharmonic Orchestra when Chung was pushing forward with a reform plan to replace members who fell short of a determined standard - regardless of nationality.

Although Perruchon’s main role at the Seoul Philharmonic Orchestra has been playing the timpani, the versatile musician actually performs various types of drums. Another specialty of his is the bassoon.

On May 27, Perruchon is scheduled to have his first chamber music concert centered on percussion as part of the Seoul Philharmonic Orchestra’s year-round Chamber Music Series. Out of five pieces to be staged, four will be French, including the one composed by his father and recognized French composer, Etienne Perruchon.

The Korea JoongAng Daily sat down with the young musician last week. The following are excerpts from the interview.


Q. Can you explain the concert? 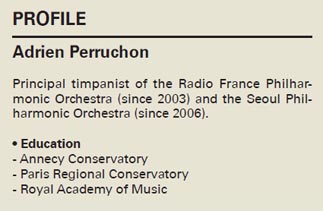 A. It is part of the orchestra’s half solo, half chamber concert. The program consists of all French music except a world premiere of young Korean composer Lee Do-hun’s “Narziss Fantasie.”

It’s kind of an overview of French music for and with percussion. I thought it would be interesting, not only because I am French, but also because historically France is the first place where percussion as a solo and chamber music instrument was developed in the 20th century.

It’s a very young instrument, despite being the first primitive musical instrument. As a solo chamber instrument, percussion is one of the most recent.

How did you join the Seoul Philharmonic Orchestra?

In 2004, Radio France came to Seoul’s Sejong Center for the Performing (Arts) to play “Carmen” on a tour. It was my first big tour and I had never been to Asia. Being a typical European kid, I had no idea about Korea or Japan.

Since we flew from Paris to Seoul, my seniors told me I had to beat my jet lag by keeping myself awake and trying to find something else to do. I arrived here and asked around and in just few hours I listened to Mahler II symphony at Sejong. It was even before Chung was involved in the SPO.

I even went backstage and met people and I had such a good time during the 10 days. It was still very far from imagining I would be working here. Maybe it was love at first sight for me with Seoul. Maestro Chung might have seen in me the connection and respect for Korea and its people (to have asked me to join the SPO later.)

How do you manage to go back and forth between France and Seoul? 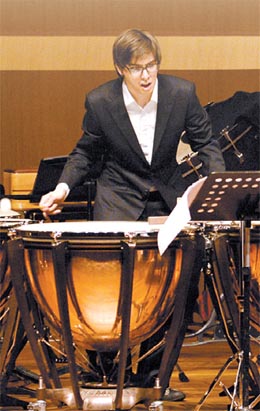 Two-thirds of the year I stay in Europe and the rest here. I play in different groups in Paris - not only in Radio France, but also in a quartet, a chamber orchestra and make guest performances at other orchestras. We play so much music and every week I have a different repertoire, so I always have to sit down and study.

Your father is a noted French composer, Etienne Perruchon. Were you influenced by him?

My father studied classical piano and composition, and had a small pop music career with his brother in the 1980s. Now mostly he writes orchestral music. My grandfather was a very accomplished artist who was a mime actor, musician, poet. He influenced my family a great deal.

My father was very frustrated as a pianist for not being able to perform in the orchestra, given that piano is mostly a solo instrument.

That is why I, my brother and sister play orchestral instruments.

What made you choose percussion eventually?

My cousin is a rock drummer and I was sitting at rehearsals for my cousin’s band at a music studio inside my grandmother’s house when I was around 11 years old. When they were having a break, I was practicing the drum, which means I am kind of self taught. I was at the time playing the bassoon in a wind orchestra. One day the drummer didn’t come and I told my conductor, “Perhaps I could play the drum.” Then the conductor called my father and said, “Maybe you should have him play the drum.”

I have never been forced into music, but I have never thought about anything else. Everyone is either a teacher or an artist in my family.

What’s it been like performing in the Seoul Philharmonic Orchestra?

It’s a very unique experience because it is not a secret that in Europe the art is going down. It’s mostly because of the economy, but also culturally the level is kind of going down and there’s a little bit of contradiction.

The heritage of classical music is strong in Europe ... It doesn’t sustain itself, you have to make it alive, but people’s interest and foundation are going down.

However, here in Seoul, the great thing is the demand is really huge. I have never seen this in any (other) part of the world. Taxi drivers here ask me if I am from the army or from America. When I mention the SPO, they all know about the orchestra and of course Maestro Chung. It’s quite unique.

Taxi drivers in Paris don’t know anything. I think the SPO is highly connected to the people here and it’s a very positive sign.

One thing I want to say, however, about Korea’s classical music scene is that there is this shallow, commercial thing going on now. Some of those young, good-looking musicians who are active overseas as well take advantage of their talent for easy money here.

I think that is a crime because I know they don’t do their best on stage in Korea. You can love or hate Elvis Presley. But even pop musicians give what they can give best.

But I can tell that some musicians take the money and go. That’s the only difference and the big difference.

Liszt was like a rock star because women went crazy. Bernstein had a line of women and even men waiting for him. But the moment you step into the stage, you cannot take it easy.

*The Seoul Philharmonic Orchestra’s “Chamber Music Series II: Adrien Perruchon Recital” will be held at 7:30 p.m. on May 27 at the Chamber Hall, Sejong Center for the Performing Arts.