A future linked to Germany’s past

A future linked to Germany’s past 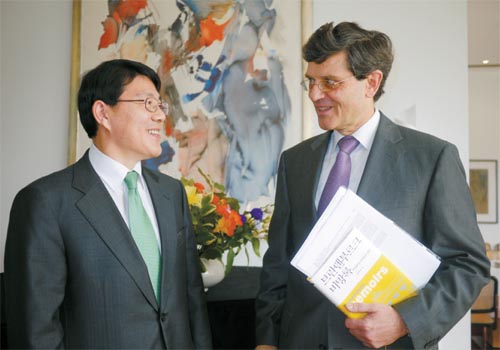 
After President Lee Myung-bak entered “unification tax” into the national lexicon last year, the South Korean government has scrambled to find a viable formula to make unification possible when the time comes.

Since then, the government turned to the closest case of national reunification it could find. And as a result, South Korea is looking to its future by examining Germany’s past.

Last Wednesday, an event to commemorate the publication of “The Brandenburg Memoirs” was held at the German ambassador’s residence in Seongbuk District, Seoul.

The Brandenburg Memoirs was written by Yang Chang-seok, the current representative for inter-Korean talks at the Ministry of Unification. Yang had held the position of director of the political and social analysis division at the ministry just a few months prior.

The book examines reunification of Germany in the 20th century.

Present at the event were Hans-Ulrich Seidt, German ambassador to Korea; Walter Klitz, regional director of the Friedrich Naumann Foundation for Freedom’s office in Korea; Yeom Don-jay, head of the Graduate School of Strategic Studies at Sungkyunkwan University; and Lim Eul-chul, professor at the Institute for Fast Eastern Studies at Kyungnam University.

The German ambassador said the event was “timely,” as it came near President Lee’s European tour, which began yesterday.

The commemoration had been planned as a casual event, but soon evolved into an active discussion on reunification among German and Korean experts.

Seidt had strong feelings for the reunification of the two Koreas, saying that it would happen possibly within the next three decades.

“No one knows what will happen, but if I were to bet a young man on the issue, I would say that I would be able to ride the KTX and go to Pyongyang in the next 30 years,” said Seidt. “And with the money from that bet, I would buy the young man coffee at a Starbucks in Pyongyang.”

“It seems like a far-off story and I understand why you would feel that way, but it’s not that far-off. We have to keep in mind that the Korean situation is unprecedented in the world,” the ambassador said. “But looking at the Middle East, we can learn that there is nothing in the world that doesn’t change.”

The source of Seidt’s confidence on Korean reunification is derived from the “overall trend” of geopolitics.

“All over the world, societies are evolving ... and North Korea has broken away from this mainstream, making things difficult for its economy. You can see from other examples that retaining hereditary succession is impossible. It’s hard to say this will go on for another 30 years,” said Seidt.

Yang said he wrote the book to prepare for reunification of the peninsula as there are many things to learn from Germany’s experience.

“During my time in Germany, it seemed that the nation was in turmoil because of the economic gap. However, compared to the freedom that the people enjoy today, it was a small price to pay,” said Yang, who spent three years from 1992 as ambassador to Germany. “I believe that economic strength will be very important in our unification. We must increase our financial power,” he said.

“Another would be our diplomatic relations. We should consider how we will deal with China later on. We should emphasize that the most important players in Korean reunification are North and South Korea, even in the six-party talks,” Yang said.

Yeom, who has been Yang’s colleague for roughly 20 years, agreed with Yang in that there is much to learn about reunification from Germany. “We have focused too much on the losses from the German unification, but German today has overcome nearly all of the side effects from the unification,” Yeom said.