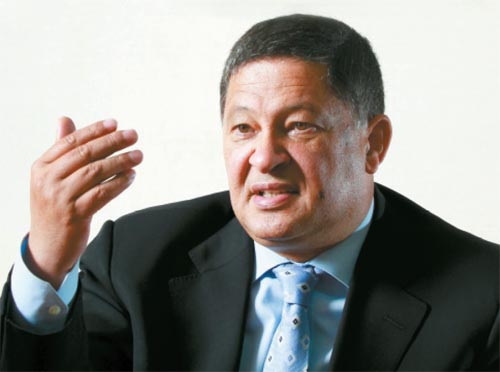 
Africa’s economic potential and abundant natural resources have long wooed countries to the continent. And President Lee Myung-bak will make a stop there as early as next month in an attempt to bolster Korea’s economic ties and foster a long term relationship.

The president will look to bring Korea up to speed with a changing Africa. It’s growing self-confidence and solid economic growth over the past decade - evidenced in part by the democratization movement sweeping through North Africa - is making the continent pursue mutually beneficial deals, rather than the one-sided relationships that plagued it in the past.

“We need to develop very urgently partnerships that are different from the past - relationships that benefit Africa more,” said South African President Jacob Zuma in a speech during the World Economic Forum on Africa held in Cape Town from last Wednesday through Friday.

In an interview last Wednesday with the Korea JoongAng Daily, South African Ambassador to Korea Hilton Anthony Dennis said his country hopes Korea will become a stronger, more mutually-beneficial partner with South Africa and the African continent as a whole.

“If Korea takes a longer-term approach that is about understanding Africa’s own social, economic goals and working out how you can support them, you will have a partnership that is a win-win,” Dennis said. “It will really anchor Korea in Africa for the long term.”

Since forming diplomatic ties 19 years ago, bilateral trade between Korea and South Africa has been growing, reaching $3.93 billion last year. South Africa’s exports to Korea mostly consist of minerals and other raw materials.

The ambassador said the two countries, both G-20 members, are on the path to becoming more important trade partners for each other, given their growing global influence.

Apart from Korea’s leading technologies and products, its economic development model is increasingly resonating in Africa.

“Many people [in Africa] feel, ‘oh we will never catch up with the world,’ but when you look at Korea, which developed in about two generations, I think the more people in Africa are made aware of the Korean model, the more inspiring it can be,” the ambassador said.

Korea is a relative late-comer to Africa.

Apart from its historical colonizers from Europe, China has recently wielded its vast diplomatic and economic muscle there. China was South Africa’s largest trade partner last year, with trade between the two countries amounting to $25.6 billion.

The ambassador said South Africa’s relationship with China should not be a roadblock for Korea to expand its footprint in the market.

“When I look at your trading statistics, Korea is doing well despite such competition,” the ambassador said. “So, I don’t see any reason why Korean companies can’t compete with Chinese or other companies [in Africa].”

The ambassador said many countries still regard Africa as a source of raw materials and encouraged Korea to engage what he called “African beneficiation,” which he described as longer-term investments, such as expanding manufacturing facilities.

South Africa, for instance, is attempting to create 5 million jobs by 2020 through its New Growth Path, which calls for an emphasis on foreign direct investment.

“It is good and wise for Korea to look at Africa and position itself to both contribute development and benefit outcomes,” the ambassador said, welcoming President Lee’s trip to Africa.

The ambassador said that democratization is an ongoing progress in Africa, pointing out that there are now more democratic countries than un-democratic ones there.

“Democracy is our goal [in Africa]. How we do it - we do it in a voluntary manner, by means of a peer review program; we visualize that it will happen over the long term,” he said.