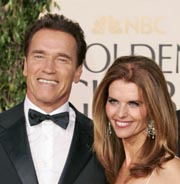 Arnold Schwarzenegger has announced that he and his wife of 25 years, Maria Shriver, are separating.

A spokesman for the actor and former California governor issued a statement announcing the news Monday night.

The statement from Schwarzenegger and Shriver said that after “a great deal of thought, reflection, discussion and prayer,’’ they decided to live apart while they work on the future of their relationship.

They acknowledge that they’re both going through a “time of great personal and professional transition.’’ Both will continue to parent their four children together.

Schwarzenegger finished his second term as governor in January and has been on the speech circuit and pursuing various entertainment projects. Shriver was a correspondent for NBC News when she left to fulfill her role as California’s first lady.