Progress is slow for Korea’s transgenders

Progress is slow for Korea’s transgenders 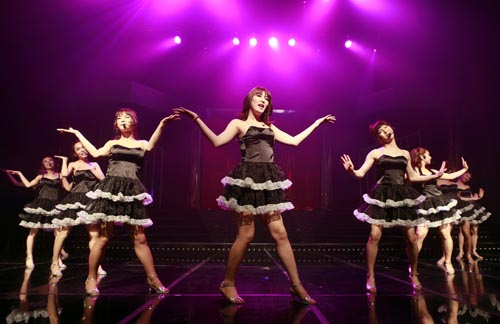 “The Fantastic Show” was launched by Harisu a month ago in Paju, Gyeonggi. The first of its kind in Korea, it consists of 30 performers, 20 of them transgender, performing song and dance. By Lee Chan-weon


The camera zooms in on the chest of a woman in an elegant black dress before panning up to slowly reveal her beautiful face and long, wavy tresses. Next, the camera focuses on her masculine-looking hands; then comes a close-up of her dark red lips and smoky eyes, before her bulging Adam’s apple is shown. At the end, the actress bursts into laughter.

With the 30-second commercial, the nation’s first transgender entertainer, Harisu, made her television debut a decade ago, knocking down a once impenetrable barrier for one of the most repressed minority groups in the country.

It was hard to join a conversation back then without her name popping up. Everyone was talking about her. (The name Harisu originates from “hot issue.”) Some raved about Harisu’s beauty, but others loathed her for being different.

The then-26-year-old brought sexual minorities to the public’s attention. It was the first time that most Koreans had encountered a transgender, whether on television or in person.

Harisu instantly rose to stardom, releasing music albums, appearing in films, on television shows and publishing a series of books. But wherever she goes, she is still met with malicious comments and stares. 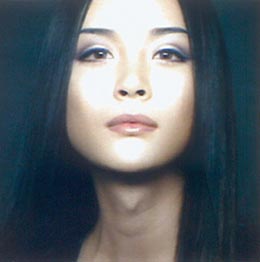 On the 10th anniversary of her debut this year, Harisu, above, wants to do more to help transgenders in Korea. [JoongAng Ilbo]

Harisu, who had sex reassignment surgery in 1997, has became a symbol of overcoming prejudice among transgenders.

Now on the 10th anniversary of her debut, Harisu wants to do more to help transgenders, who face widespread stigmatization and discrimination that oftentimes prevents them from educational and career advancement.

“Two of my [transsexual] friends committed suicide three years ago on the same day. They always looked bright, but they had to hide their pain for years,” said Harisu during a showcase for the newly launched transgender performance “The Fantastic Show,” the first of its kind in Korea. During the 80-minute program, about 30 performers - 20 of them transgender - sing and dance a variety of genres.

“The club [Mix-Trans Club] would function as a training school for transsexuals who want to become entertainers, while the show provides job opportunities for those who want to lead ordinary lives as ordinary people,” Harisu added.

Transgenders are still considered the most vulnerable of a group that includes lesbians, gays and bisexuals.

“Of all sexual minorities, transgender is the lowest class. They are often abandoned by their families and most of them drop out of school because of bullying,” said Lim Tae-hoon, the former head of the Solidarity for LGBT Human Rights of Korea. “They need quite a lot of money to receive sex change surgery, but the inconsistency between their appearance and their citizen identification numbers often makes it hard for them to land decent jobs.

“The last option for them is working at shady businesses to earn money for surgery,” said Lim.

For a man to legally become a woman in Korea, he must change his citizen identification number so that it begins with a “2” instead of a “1,” but that requires sex reassignment surgery, which costs around 30 million won ($27,272). It’s close to four times that for a woman to become a man - 100 million won. The latter is considerably more expensive because it is considered much more complex.

The National Human Rights Commission of Korea expressed concern over the high hurdles in 2008, saying the current law “is an excessive measure.”

Regarding the law, former Representative Roh Hoe-chan of the Democratic Labor Party in 2006 attempted to permit citizens to change the sex on their ID cards without shelling out tens of thousands of dollars for a sex change. The measure failed.

“The current law requires perfect surgeries, but they often end up with many side effects,” said Na Young-jung of the New Progressive Party, who once belonged to the Democratic Labor Party with Roh. Na had helped draft the proposed bill for the National Assembly.

“Passing this law was always pushed back because many [politicians] thought it was not as important as other issues. But it is a matter of life and death for some people,” Na said. “Sex reassignment surgery is not covered by national health insurance, meaning it’s hard to regulate doctors who conduct the surgeries. There are few doctors who can conduct the surgery. If the surgery goes wrong, patents have no one to turn to. In the worst case scenario, surgery recipients could die and nobody would ever notice.”

Fighting against widespread stigmatization, performers in The Fantastic Show have lofty goals. They want it to become a tourist attraction similar to that of Thailand’s “Alcazar Show,” which draws thousands annually to its cabaret show in Pattaya.

The Korean show was launched last month, but performers are still met with empty seats. “It will take at least a month to attract tourists, because we’re still promoting the show to local travel agencies,” said Lee Eun-sung, one of Harisu’s managers, soon after its launch.

Since the show is located in Paju, Gyeonggi, the production company plans to package it with other tour destinations in the region including Paju Book City and the Demilitarized Zone.

Of the 20 transgender performers, all are male-to-female. Some just started to receive hormone therapy or only recently received breast implants.

They all have a story to tell.

Among them, Han Ji-woo, a petite woman who plays the flute, is still recovering from sex reassignment surgery, but that hasn’t stopped her from showing up at rehearsal.

“It must be painful for her to stand on stage, but she doesn’t listen to us when we tell her to take some time off,” whispered Hyeon Ku-nam, the show’s director, as he was watching them rehearse last month.

“She used to teach music at high school, and she even finished her military duty,” Hyeon pointed out.

Show officials say these performers made brave decisions to go on stage in Paju.

“If you work in [transgender] bars, you earn up to 4 million won per month, but we can’t pay as much. Because of this, it was hard to recruit performers,” Hyeon admitted.

Choi Han-bit, a transgender performer, addresses herself as one of “Harisu’s kids.”

Choi made it to the final round of the television show “Supermodel Contest” in 2009, becoming both the first transgender to do so and the first such participant.

Notwithstanding the successes of Harisu and Choi Han-bit over the last decade, most within the LGBT community say little has changed for them.

Rather, they say the media commercializes beautiful transgender women as profitable products.

When television celebrity Hong Suk-chun came out in 2000 as Korea’s first gay celebrity, he instantly became jobless. Where a balding, soft-spoken man was immediately rejected in this conservative society, sexually charged Korean pop culture embraced the beautiful Harisu with open arms when she debuted only a year later.

There still have been no female-to-male transgender celebrities in Korea, and homosexuality is still considered taboo.

In fact, Harisu is a rare case of a transgender making it in Korean show business.

Another trailblazer in the community is Kim Hye-sook, a transgender in her mid-40s currently going through female hormone therapy.

The pursuit of her true identity almost cost Kim her life.

Kim said she had reason to cut off her penis with scissors in a suicide attempt while serving a prison sentence in August 2006.

“Ever since I was young, I knew I was a woman, although I had the body of a man. My parents had few resources to care about my gender identity disorder because we were poor.” Kim’s voice echoed through Rachel Carson’s Hall, on the first floor of the Korea Green Foundation in central Seoul. Her voice was the only clue that she was once a man.

A forum there last month discussed ways to improve the rights of transgenders serving time in prison.

In March 2005, Kim was jailed in Gyeonggi as a man. On her first day there, Kim told prison officers that she was transgender. “You know, I wore the prison guards down as time went by, so I asked them to allow me to buy women’s underwear. Some allowed me and others cursed me and locked me up by myself.

“There are no guidelines about transgender prisoners. I had to go through the same thing again and again. I was stressed out, and I decided to protest by going on a hunger strike,” Kim said.

After the fast, Kim was classified as a suicide risk and was locked in a single cell equipped with a CCTV camera.

One day, after further harassment, Kim decided to take her own life.

She asked an officer for scissors, so she could cover the walls of her cell with new wallpaper. “He gave them to me. I went to the bathroom and cut it off and flushed it down the toilet. When I came out of the bathroom, the officer noticed I was covered in blood.”

After emergency surgery, Kim recovered and was transferred to a different prison. There, she had to start from the beginning by explaining her gender identity disorder. It was a cruel cycle, she said.

Kim sued the prison with the aid of sexual minority groups in 2009, the year she completed her sentence. A year later, Kim partially won her suit. The ruling read: “The prison should compensate Kim for giving her scissors, because she had been classified as a suicide risk.” The court ordered the prison to compensate Kim 3 million won ($2,772).

The ruling didn’t sit well with Kim or her lawyers. “The court didn’t take into consideration Kim’s reasons for cutting off her genitalia and attempting to kill herself,” said Han Chae-yoon, an activist at the Korean Sexual Minority Culture and Rights Center.

Kim’s appeal is pending in the courts, and her lawyer expects a decision within two months.