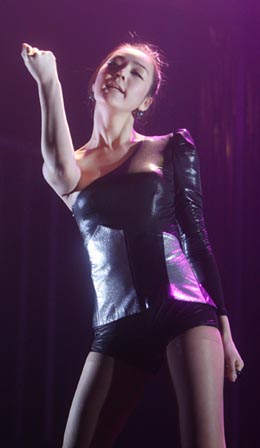 Choi Han-bit wants to become a role model for young transgenders in Korea and be the first transgender in the country to receive a doctorate. [YONHAP]

Among the 20 transgender performers in “The Fantastic Show,” a live song and dance show launched by Harisu, the nation’s first transgender celebrity, Choi Han-bit addresses herself as one of “Harisu’s kids.”

Choi gained fame two years ago when she made it to the final round of a local supermodel contest, becoming both the first transgender to do so and the first such participant.

The 24-year-old college senior, who is majoring in dance, said she still vividly recalls Harisu’s debut commercial a decade ago.

“I was 15 at the time. I was thrilled that I could live like her,” recalled Choi. “I attended an all-boys middle school, but I was different; I carried a pink Hello Kitty backpack stuffed with cute stationery.”

Choi underwent sex reassignment surgery at the age of 19.

Harisu, Choi said, was a trailblazer for transgenders in Korea. “She made a great impact, and I wouldn’t be here if it weren’t for her.”

Choi proudly said she wants to knock down barriers for young transgender people and become a role model.

“Harisu has achieved many things, but there is still much to be done. I want to be the person who can do that. I will go to graduate school, and it would be better if it’s for women only,” said Choi with a grin on her face.

“My ultimate goal is becoming the first transgender with a doctorate [in Korea].”

Unlike many transgender people who are abandoned by their families because of their sexual identity, Choi was lucky. Her parents supported her decision to live as a woman and pursue a college education.

She added, “I have many dreams, but the biggest one of all is to have a happy family of my own and become a proud daughter to my parents.”