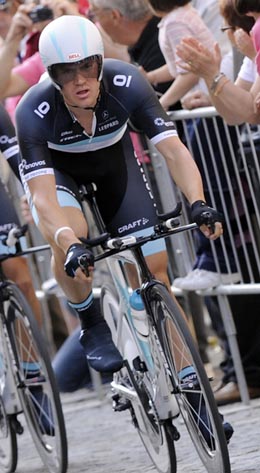 MILAN - Hurtling down an Italian mountain pass at a speed that only a car would normally reach, Belgian cyclist Wouter Weylandt lost control of his bike for just a split second. In a sport where the smallest mistake can have catastrophic consequences, it proved lethal.

Weylandt tumbled to his death Monday in a downhill crash during the third stage of the Giro d’Italia, with the riders going 40-50 miles per hour at the time. It was the first fatality at the Italian race in 25 years and the first at one of the sport’s showcase tours in 16 years.

It was one of the most high-profile deaths at an international sports event since Georgian luger Nodar Kumaritashvili’s fatal crash in training on the eve of last year’s Vancouver Olympics. It also renewed questions about safety in cycling, where riders zip down winding mountain roads with steep drops and hairpin curves.

“Our sport is very tragic at times. It has been throughout its history,’’ said British rider David Millar, who took the pink jersey as race leader after Monday’s stage but said it now meant “nothing.’’

“The bottom line is that the guys here are the best cyclists in the world, and the best guys in the world can have a mechanical fault or find themselves in the wrong place at the wrong time,’’ Millar said.

The crash on the Passo del Bocco was not broadcast live on television, but images showed paramedics frantically trying to revive Weylandt, who was sprawled on his back on the road, bleeding heavily from the face and head.

Medics who were following the cyclists in cars rushed to the scene, but it was already too late.

“We arrived immediately as we were behind his group,’’ Giro doctor Giovanni Tredici said. “He was unconscious with a fracture of the skull base and facial damage. After 40 minutes of cardiac massage we had to suspend the resuscitation because there was nothing more we could do.’’

Weylandt’s father and the cyclist’s pregnant girlfriend were en route to Italy and were to be met at Malpensa airport in Milan.

“I feel obliged to share with you a text message I received today, reminding me that this is a sport where everybody applauds the riders, but that they all risk their lives in every single meter of the course,’’ race director Angelo Zomegnan said.

The crash came almost exactly a year after one of the biggest victories of Weylandt’s career - the third stage of the 2010 Giro on May 10 as it passed through the Netherlands. His other main tour stage victory came in the 2008 Spanish Vuelta when he won the 17th stage.

The rider’s team put a picture of a smiling Weylandt on its Web site.

“The team is left in a state of shock and sadness and we send all our thoughts and deepest condolences to the family and friends of Wouter,’’ the statement said. “This is a difficult day for cycling and for our team, and we should all seek support and strength in the people close to us.’’

Race organizers canceled the prize ceremony after the stage, a 107-mile ride from Reggio Emilia to Rapallo won by Spain’s Angel Vicioso.

Weylandt was the first rider killed in a crash in one of cycling’s three main tours since Italian rider Fabio Casartelli died during the 1995 Tour de France. At the Giro, Weylandt is the fourth cyclist to die during the race after Orfeo Ponsin in 1952, Juan Manuel Santisteban in 1976 and Emilio Ravasio in 1986.