The sweet lure of low prices

The sweet lure of low prices 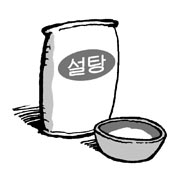 In medieval Europe, sugar was used as a medicine or a raw material for making preservatives. In the Middle East in the 11th century, it was called a panacea. But today, sugar has earned a bad reputation. No other food product has fallen from such a prestigious status to an abomination.

A natural sweetener, sugar is a source of carbohydrates, a key nutrient. When you consume sugar, it is converted immediately to blood sugar and provides energy to the body. That’s why glucose is given to those who feel lethargic. If you get tired while climbing a mountain or running a marathon, consuming candy or a chocolate bar will give you an instant energy boost. Humans can also get the energy they need from sugar by eating rice and grains. The sugar from grains is burned in the course of the digestive process and puts little stress on the body.

But plain sugar is absorbed quickly and it could very easily lead to excessive sugar consumption and weight gain. Sugar also accelerates the discharge of calcium in the blood and makes the bones weak.

The word “sugar” comes from the Sanskrit word “sakkara.” The first record of sugar comes from 327 B.C. A general under Alexander the Great had travelled to India and wrote that the people of India were making sugar from weeds without the help of bees. After Christopher Columbus discovered the New World in 1492, sugar plantations sprang up in Central and Latin America. The labor was done by slaves captured from Africa and along with cotton farming sugar plantations perpetuated the slave trade.

In Korea, sugar was first manufactured by Dai-Nippon Sugar Co., which was a Japanese company in Pyongyang in 1920. Cheil Jedang was the first Korean company to build a sugar manufacturing plant in Busan. Sugar topped holiday gift lists in the 1970s, when a host would often serve sugar water to guests.

Sugar’s celebrated status has long disappeared but the officials who regulate consumer prices have not changed much. Whenever the price issue is raised, they always argue that sugar prices are stable. Today, sugar makes up only 0.03 percent of consumer prices. Despite such tight regulatory control over sugar, however, the price of sugar is more than 30 percent less in Korea than in other major economies.

The government may deserve criticism for encouraging excessive sugar consumption by keeping the price so low.