Two productions, one recipe for love

Two productions, one recipe for love 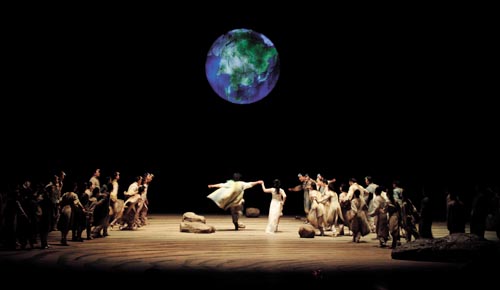 Nemorino and Adina dance together in a production of Donizetti’s “The Elixir of Love” at the Seoul Arts Center. The performance will run until May 22. Provided by the Korea National Opera


As the season of marriage approaches, the singles among you may be thinking about ways to find the perfect partner. Two productions of a romantic opera by Gaetano Donizetti could provide some hints on how to concoct a recipe for love.

The opera, “The Elixir of Love,” is often considered to be one of the funniest pieces in the opera repertoire. It will be presented in Seoul this month by the Korea National Opera and Olympus Korea.

The plot of the opera, which premiered at Teatro della Canobbiana in Milan in 1832, is a love story about a gullible peasant named Nemorino who falls in love with the wealthy landowner Adina. He tries to woo her after buying a potion called the “elixir of love” from traveling salesman Dr. Dulcamara. Nemorino expresses his longing in the aria “Una Furtiva Lagrima,” which is one of the highlights of the production.

The production by Olympus Korea focuses on the humorous aspects of the story. During the show, Dr. Dulcamara goes through the audience hawking his “elixir of love,” which comes in the form of a vitamin drink, promising that love is sure to follow. The production, which is set in a small theater and eschews the spectacle of many opera performances, feels more like a play. 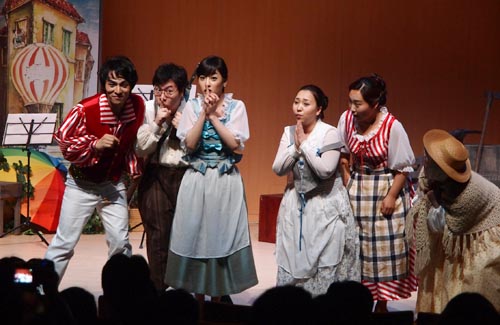 Olympus Korea’s production, which runs until June 2 at Olympus Hall, highlights the humorous aspects of the opera. Provided by PRGATE


With this production, Olympus Korea is celebrating the one year anniversary of its performance hall’s opening and the launch of its new “Salon de Opera” project, which aims to make opera more accessible to audiences.

The Korea National Opera’s production at the Seoul Arts Center’s Opera Theater will be larger in scale and more lyrical. It connects the story to the poem “Prayer I” by Seo Jeong-ju (1915-2000), a renowned Korean poet. In his poem, Seo compares a pot that is half full and half empty to the things he wants in life.

Director Lee So-young said she was so inspired by Seo’s poem that she decided to use the visual image of the pot (it holds the elixir) as a symbol of the longing for love.

“A person’s desire to fill the pot will eventually make the pot full, it’s just a matter of how desperately you want to fill it,” Lee said in a press release.