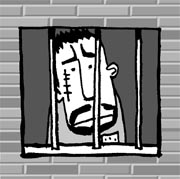 A crime is a dangerous but profitable business. A criminal is hardly a fool. He calculates his gains and losses before deciding to commit a crime. First, he considers the financial gain, taking into account the cost of bribes or attorneys’ fees in case he gets caught. He would assume the worst-case scenario of serving a prison sentence and calculate the heaviness of the penalty, the pain associated with imprisonment and other disadvantages. This is an economic analysis of criminal behavior, and the theory is quite convincing for planned crimes such as fraud, embezzlement and misappropriation.

Economist Gary Becker, who won the Nobel Prize in 1992, calls these “rational crimes.” A crime is committed when the expected gain from a crime is greater than the expected cost of committing it. To express this idea, Becker devised a formula (the expected cost = the probability of getting caught and arrested x the intensity of punishment). To prevent crime, the most efficient course would be to increase arrest and conviction rates and make sentences heavier.

Bernie Madoff, former chairman of the Nasdaq stock market, is responsible for the largest Ponzi scheme in history, and in 2008, a U.S. court sentenced him to 150 years in prison. Madoff’s financial fraud resulted in a $60 billion loss to his clients, and his crime was punished accordingly.

This is completely different from some criminals in Korea who use the profits from their crimes to hire former judges and prosecutors as their defense attorneys and then pursue every possible avenue to get away with their deed.

The Busan Savings Bank scandal involves illegalities and corruption as well as lax supervision by the Financial Supervisory Service. A third-generation offspring of a conglomerate’s founder made a profit of 25.3 billion won ($23.3 million) through stock manipulation. A chairman of a shopping mall leaseholders’ association committed an act of fraud worth 23 billion won. The legendary Bugs Music ended with an embezzlement of 80 billion won. Given the recurrence of similar crimes, we must conclude that there is a serious flaw in the legal system.

Experience tells criminals that the price of committing a crime is cheap, so they are getting bolder than ever. If the heaviest sentence, 50 years in prison, were given, financial crimes would decrease. There is no reason why we should not have longer prison terms, of 100 to 200 years, as in the United States.