Today to Sept. 25: For the first time in Asia, viewers will have a chance to see the art behind the scenes of classic Disney fairy tale films from the entertainment giant’s 80-year history. Among the 600 pieces on display are original concept artworks, sketches, storyboards, final frame cells, background paintings and movie clips from the Walt Disney Animation Research Library. Included in the collection are works by famous illustrators such as Mary Blair and Kay Nielsen.

Included in the collection is the world premiere of Kim Sooja’s video piece “A Needle Woman,” which has never been shown in its entirety. The video, which was three years in the making, consists of eight channels. Each channel shows Kim in a different city - Tokyo, Shanghai, Delhi, New York, Mexico City, Cairo, Lagos and London - and the videos all start and stop simultaneously. In each video, Kim stands as straight as a needle amidst the pedestrians on the street. As a whole, the piece portrays the artist’s growing distance from ordinary people.

To June 10: This is an exhibition of artists Lee Moon-ho and Han Kyung-woo. Exhibitions normally show what people see, but “Blind Spot” aims to portray what people do not see - their blind spots.

Media is everywhere, in the form of photos, TV sets, and in other confined spaces. What people normally witness through these square or rectangular screens is limited because of the controlled and restricted angle and space around the image. Artists Lee and Han flip over the unseen areas of these spaces, revealing their blind spots. 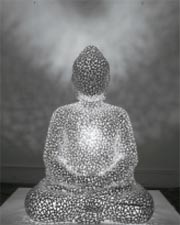 To May 29: Korean sculptor Kim Byung-jin is known for reaching beyond the limits of sculpture with his use of drawing, sculpture, plane surfaces and three-dimensional forms.

For Kim, a “frame” suggests fixed limitations within boundaries, but “framing” represents movement, fluidity and change, while also emphasizing the temporality of boundaries.

Here, Kim plays with light and shadow by allowing the glare of the gallery lights to reflect off of the walls and onto his artworks. Within this context, Kim asks what the difference between shadow and reality is and explores the contradiction between existence and nonexistence and reality and illusion. His use of crooked wire strips and the ever-present shadows they cast blur the ambiguous boundaries in our world.