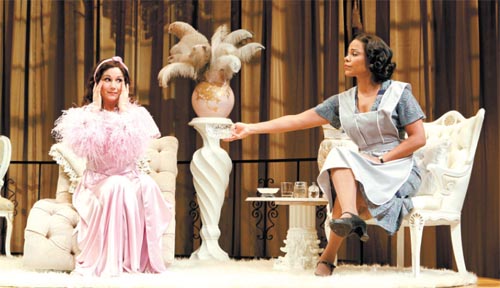 In this theater publicity image released by The Hartman Group, Stephanie J. Block, left, and Sanaa Lathan are shown in a scene from “By the Way, Meet Vera Stark” in New York. [AP]


NEW YORK - The opening scene of “By the Way, Meet Vera Stark’’ begins with such overripe acting and stilted dialogue that you might be tempted to bolt for an exit. Don’t.

Two women are in an Art Deco-decorated living room. There’s a glamorous white woman reclining on a sofa in a silk dressing gown and her black maid, who has arrived with news about a visitor. They both have pretty terrible Southern accents.

“Miss? Mr. Lafayette here to see ya,” says the maid. “Tell him I’m not here,” replies her mistress, putting her hand to her brow.

After a few more exchanges, the scene breaks down: The white woman forgets her lines and the maid digs up a script from her apron. Resist this second chance to gather your belongings and flee from Lynn Nottage’s clever new play, which opened Monday at Second Stage Theatre.

What’s happening is actually a scene-within-a-scene. The two women - an aging starlet and her maid, Vera Stark - are rehearsing a Civil War melodrama in a mansion in 1933. This little visual joke is the first indication that Nottage wants to have some fun after her scarring “Ruined.”

Inspired by black actresses forced to play nannies and maids in the golden age of Hollywood, “By the Way, Meet Vera Stark” is a humorous and poignant look at Hollywood stereotypes and racial legacies led by Sanaa Lathan in the title role and Stephanie J. Block as her actress employer, Gloria Mitchell.

It’s a tale in two parts, with the first act set in the 1930s as both Vera and Gloria vie for parts in the hoop-skirt epic “The Belle of New Orleans” and the second act shooting ahead to today as a panel of academics debate Vera’s work.

Lathan shows her range in the role, equal parts knowing and goofy, flirtatious and striving. The actress, who earned a Tony Award nomination when she was last on stage in New York in “A Raisin in the Sun,” is at her best playing Vera in her 60s when she appears on a TV chat show in Act 2.

Nottage uses Vera to explode those terrible shucking and jiving roles that black actors were consigned. The playwright makes it plain that African-Americans were embarrassed taking them, but it was a paycheck and it might lead to something better. When Vera brings home a script for “The Belle of New Orleans,” she tells her friend it’s got something good for an out-of-work black actress: “Slaves with lines, honey,” she says.

To get the part of the maid Tilly, Vera must play along with white stereotypes of black suffering and even makes up a bad blues song. “Look at what enviable talent has given me,” Vera complains. “Mammy Jane, Josie, Bitsy, Petunia and Addie, 40 years of characters who they didn’t even bother to give last names. That’s something to celebrate, honey!”

Vera’s black friends also either play along to win parts, walking right into the heart of the yes’um-and-no’um roles, or try to shift their own identities, with one pretending to be Brazilian to escape the groveling parts given to African-Americans.

The second half of the play is interestingly handled. Vera joins a late-night chat show panel in 1973 while the action is stopped and started for comments by a panel of experts in 2003, who are debating whether Vera was a sellout or a pioneer.

Director Jo Bonney does a wonderful job juggling three different time periods - not to mention projected film clips and actors freezing on cue - without letting the audience lose its bearings.