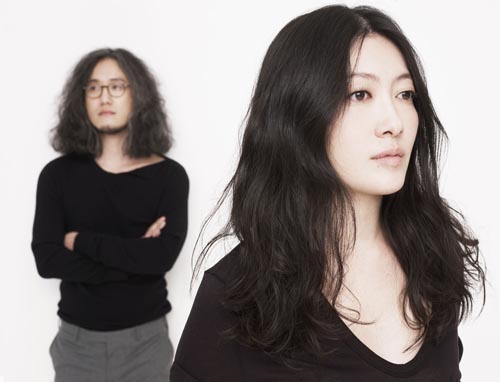 
The Sogyumo Acacia Band, a small band formed by Kim Min-hong and Song Eun-ji, marked their eighth anniversary this year with the release of their fourth album “Ciaosmos” last month. It is their first album in four years. The word “Ciaosmos” is a portmanteau of the Italian word “ciao” and the English word “cosmos.” For the band, it symbolizes “a universe filled with hellos and goodbyes.”

This album includes stories about the joy of meeting someone long lost, the deep longing for someone that is missed, and the heartbroken farewells that are too often experienced in life. The second track (“Dream Is Over”) has a sense of remorse, while the last track (“Love On”) ends on a note of optimistic longing.

Song and Kim met in the beginning of 2004. Ho-ran, the vocalist for the band Clazziquai, introduced them to each other at a restaurant in Gangnam District, southern Seoul. Ho-ran was also the one who gave the band its name.

Kim Min-hong has drawn inspiration from heavy metal since he was young. It’s somewhat inconsistent, then, that the Sogyumo Acacia Band has such a modest sound.

“I think the type of music I compose is due to Eun-ji’s influence,” said Kim. “The music I made was always rugged, but with Eun-ji’s help, I was able to make a more complete and well-arranged piece of work.”

The Sogyumo Acacia Band’s music is for the most part produced in Min-hong’s home, since they don’t have a separate recording studio. When Kim composes music, Song sits on the floor and sings.

Song admitted to being surprised that the band has been together for such a long time.

“But I think we have been together for this long because we have a lot of things in common,” Song said. “We always want to develop. One of the reasons why we want to develop all the time is because of the music.”

Unfortunately, Song’s parents have always been against the idea of their daughter being a musician. Still, she says she will never give it up.

“The most enjoyable thing in my life is music,” she said.

And for the record, the two said they are not in a relationship, and they agree that it’s the reason why they’ve been working together for so long.

Kim had been the band’s primary composer and lyricist, but starting with Ciaosmos, this has changed.

Of the 10 songs on the album, Song wrote the lyrics for six of them.

Song added, “It is much easier for me to become one with the lyrics because I’m writing them.”

Early last year, the duo was the subject of the documentary “The Story of the Sogyumo Acacia Band.”

In the movie, Song says, “Do we really have to make music? Can’t we just listen to it?”

But for the band’s fans, the answer is likely to be “no.” But they needn’t be concerned. The duo looks like it’s going to be making music for a long time.