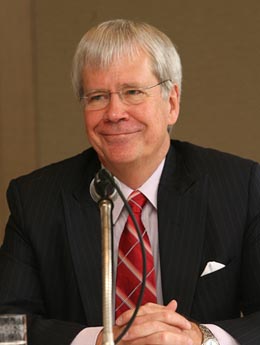 John Mitchell, president of the U.S. cotton trade group Cotton Council International, knows his cotton. In particular, he has been sourcing cotton to Korea for 35 years in every form from raw cotton to cotton yarn - though his visit to Korea this week was his first.

“I don’t know why I haven’t visited before now,” he said at an interview with a bevy of other Cotton Council officials this week as part of the local celebration of Cotton Day, the organization’s promotional event that spans the globe, including Korea, Japan, Hong Kong and Taiwan.

“There are three ways that Korea is important to us: the amount of raw U.S. cotton that Korea imports, the facilities that Korean companies control outside of Korea and the Korean consumers,” Mitchell said.

In fact, the market share of U.S. cotton out of all raw cotton imports had fallen below 50 percent in the last two years, dipping to 35 percent in 2010.

But U.S. cotton is regaining some of its footing. In the first quarter of this year, U.S. cotton sales have already seen an increase of 20 percent in Korea and now command a 53 percent market share. That figure is expected to reach 60 percent for the year, according to the Spinners & Weavers Association of Korea.

“Korea used to import a lot of cheap cotton from Southeast Asia, but the Korean textiles industry is increasingly specializing in high-value premium fabrics and gravitating toward higher-grade U.S. cotton,” explained Park Yoon-keun, the local representative of Cotton Council International.

“And because the yen is expensive, and similar products from China and India are less dependable in quality, Korean spinners and weavers are becoming more competitive for their high-quality cotton products.”

The strength of Korean textiles in the face of increased manufacturing in emerging countries, officials noted, is the consistency of its quality.

And the Korea-U.S. FTA is expected to give Korean spinners and weavers an edge in the U.S. market.

“The automobile and textile industries are among the biggest beneficiaries of the Korea-U.S. FTA,” said Park. “For example, the so-called ‘yarn forward’ clause that cuts tariffs down to zero for Korean fabrics that are made from U.S. yarn and then reimported to the U.S. could allow it to even compete with Chinese products in price.”

The reason for the jump in prices was the economic slump, followed by a boom in demand. During the global financial crisis, cotton consumption shrank and growers scaled down their cotton planting. But in 2010, a boom in demand, especially from emerging nations such as China, on top of the 2 to 4 percent traditional annual increase in consumption, drove prices up.

“No matter how swiftly the demand increased, farmers cannot respond but once a year when they plant the cotton seeds,” Mitchell said.

And with the rise of “fast fashion” brands such as H&M and Zara, whose products go from the drawing board to the shelves in 3 months, the industry has had to adapt.

“In the past, the process that ran from retailers ordering clothes from fashion firms, who order fabric from weavers, who order thread from spinners, who order cotton - took about 12 months,” said Mitchell. “Now it’s unpredictable and much more compressed, so we’ve got the logistics and the ability to deliver cotton in six to seven weeks from time of order.”