Visitors to the National Assembly Library in Yeouido, western Seoul, can now see picturesque photos of the trompe l’oeil murals that grace European buildings and the panels used to cover the buildings during renovation projects. The photos are so elaborate that it is difficult to tell the difference between the illusionary worlds in the murals and panels from the real world outside them.

The exhibit, titled “Moment of Realization: The Meaning of Photography,” is a solo show by artist Han Sung-pil. It was organized by the library and Grand National Party lawmaker Cho Yoon-sun to celebrate the 2011 G-20 Seoul Speakers’ Consultation, slated for Wednesday to Friday. The exhibition runs until May 31.

Participating in the meeting are National Assembly Speaker Park Hee-tae and his counterparts from the other Group of 20 countries and five non-G-20 countries, including Spain and Singapore.

“With this exhibition, the National Assembly Library will show foreign political leaders the growth and potential of Korea’s fine-art photography,” the library said in a statement. 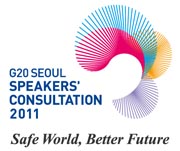 Among the works on display is “Light of Magritte” (2009), which shows the panel that covered the Magritte Museum in Brussels during the building’s construction.

The panel is covered by a print of the famous painting “Empire of Light” by Rene Magritte, and functions as a gate into the illusionary world of the Belgian surrealist artist.

Near the building are real street lamps that look very similar to the ones in the painting, lit below the blue sky of the “magic hour” - the time right before sunrise or after sunset. This blurs the line between the outside world and the world inside Magritte’s painting, generating a second layer of illusion.

In this way, photography, which is frequently regarded as a faithful representation of reality, blurs the boundaries between reality and illusion, and original and reproductions. The artist has long been interested in this type of work.

At a press conference on Thursday, Assembly Speaker Park said he would make an effort to promote the Korean Wave at the G-20 Speakers’ Consultation.

During the three-day meeting, the participants will discuss issues such as international cooperation for peace, anti-terrorism and balanced growth between countries after the 2008 financial crisis. The meeting follows the G-20 Summit in Seoul last November. The G-20 Speakers’ Consultation was first held in Canada in September 2010, after that country hosted the G-20 Summit in June of the same year.