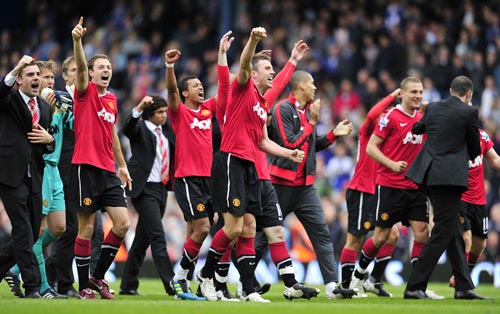 Manchester United players celebrate at the final whistle of their Premier League match against Blackburn Rovers on Saturday. Manchester United drew 1-1 with Blackburn, a result that secured them a record 19th title. [AFP/YONHAP]

With only a point required at Blackburn to capture the Premier League trophy with a game to spare, Wayne Rooney salvaged a 1-1 draw from the penalty spot in the 73rd minute.

“It’s very good, a long day ... it was agony at times there,” Ferguson said. “It was a disappointing game to be honest but I’m not particularly bothered by that ... the important thing is being the most successful.”

Fulfilling it would have seemed unimaginable when Ferguson took charge of United in 1986 with a vow to knock Liverpool “off their perch.”

Liverpool had just stretched its lead over United to 16-7 in the title stakes and by 1990 the Anfield outfit had raised the bar to 18.

But United kept its faith in Ferguson and in 1993 he ended the club’s 26-year wait for another league crown.

Eleven more have followed since then, and in that time Liverpool has failed to top the standings once.

“Hopefully, we will keep it going for a long time,” Ferguson said. “It’s a great achievement.”

Even at 69, after winning his 27th major title at United, Ferguson has no plans to retire. And neither has 37-year-old midfielder Ryan Giggs, who has played in each of United’s 12 Premier League-winning teams since 1993.

“Twenty years ago we were nowhere near Liverpool,” Giggs said. “It’s a good feeling to be ahead of our greatest rivals.”

Manchester City has been a less formidable rival, but the big-spending team ended its 35-year title drought by beating Stoke in the FA Cup final two hours after United’s landmark success.

But Saturday’s match at Ewood Park went against the script, with Ferguson’s decision to rest goalkeeper Edwin van der Sar backfiring in the 20th minute.

Tomasz Kuszczak, who had struggled to deal with a back-pass minutes earlier on his first appearance in a month, chased Brett Emerton’s cross from the right.

Instead of pushing the ball away, he kept it in play and the ball fell to Martin Olsson, who played a one-two with Canadian-born Junior Hoilett before crossing to Emerton to sweep the ball home from a central position.

“We lost a cheap goal and they were encouraged by that,” Ferguson said.

United’s breakthrough came after a moment of controversy, when striker Javier Hernandez was tripped in the area by goalkeeper Paul Robinson.

Blackburn’s players felt Hernandez went down too lightly and the penalty was only awarded by referee Phil Dowd after he consulted his assistant amid protests from both teams.

Rooney kept his cool to score his 15th goal of the season - and the one that ensured Liverpool’s record would be surpassed.

“I was terrified, the ref took a long time to give it,” Rooney said. “I had to compose myself. I’d been practicing all week.”

For the England forward, who grew up supporting Liverpool’s local rival Everton, the goal is payback for the lucrative new contract he was awarded in October after he rocked United by threatening to leave.

“After the year I’ve had, with the ups and downs, this is for the fans and the team,” Rooney said.

But the manner of United’s title-deciding point was in keeping with a lacklustre season all-round for the top teams. United is the first side to win the league with only five away wins since Liverpool in 1976-77.

“The away form has been disappointing,” Ferguson said. “Normally our away form is much, much better, but we are protected by the home form.”

United now has an unassailable lead over second-place Chelsea, which is seven points behind with two games to play.

United overcame Chelsea’s late resurgence thanks to its imperious form at Old Trafford, where it has dropped points just once this season - a home draw against West Bromwich Albion.

Ending the season with both the Premier League trophy and European Cup would prove the doubters wrong if United can overcome Barcelona at Wembley Stadium on May 28.