Murray says his ‘crisis’ is behind him now

Murray says his ‘crisis’ is behind him now 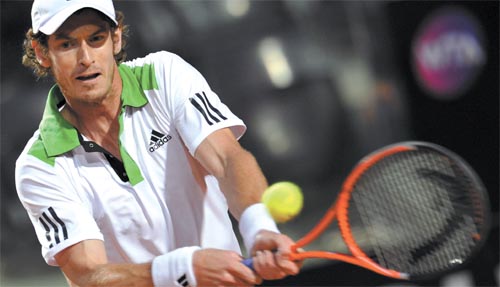 Scotland’s Andy Murray returns the ball during the semifinal match of men’s singles against Novak Djokovic of Serbia at the Rome Masters tennis tournament in Rome, Italy, on Saturday. [XINHUA/YONHAP]


ROME - World number four Andy Murray insisted that his narrow defeat to Novak Djokovic in a three-hour marathon at the Rome Masters proved he was out of the supposed crisis affecting him earlier this season.

The Scot lost his way earlier this year after a straight sets loss to Djokovic in the Australian Open final.

However, he has gradually rediscovered his form and he came as close as anyone has this season to beating the Serb, whose unbeaten run in 2011 now stands at 36 matches.

“The crisis I was in, supposedly, is over, I feel I’m playing great tennis again,” said Murray, who had been within two points of victory on Saturday. “I can compete with those guys, I need to play that well and better if I want to win the French Open and I need to get fitter over the next days.

“This definitely gives me confidence. Your tennis never goes away, I’ve been in the top four players in the world for four or five years now.

“I was on a bad run, mentally I wasn’t in the best place but my tennis is never going to go away.

“When I have intensity and the right attitude like I have had the last few weeks, I will definitely be at the top again.

“I didn’t feel at any stage in crisis, I just needed to snap out of the mental state I was in and I would come out stronger. Now I feel fresh going into the French Open.”

There was a touch of bitterness, though, for his failure to close out a match in which he was just two points from victory on his own serve, on three different occasions.

“It was a good match, obviously a long one, there were a lot of good rallies,” he said. “It’s always very physical against Novak because he moves well. I had chances to win and probably should have done. It was a combination of not being in that position much this year and playing very few matches.”