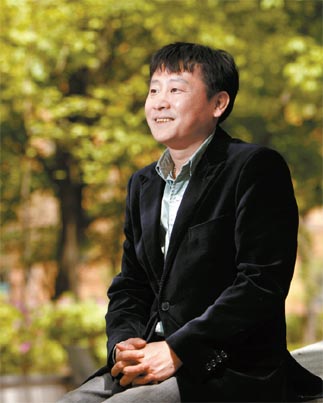 Jung Sung-san, who defected from North Korea in 1995, made his name as a director who focuses on human rights issues in the North. By Oh Sang-min

Jung Sung-san has made a name for himself since his escape from North Korea in 1995. Now, he is compelled to wield the forces of the Internet to help the two Koreas come together with a strategy that moves away from his usual expertise.

Since defecting, he has had a hand in changing South Korean cultural works that involve North Korea.

“In the past, North Korea would mainly be portrayed as frightening, inhumane,” Jung, 42, told the Korea JoongAng Daily. “But I advised movie directors and producers to add a human touch to the North Korean element in their films.”

Jung proudly emphasizes that all the films he has been involved with have been successful at the box office, including “Joint Security Area” (2000) and “Silmido” (2003). In 2006 he produced “Yodok Story,” a musical that has been successful in South Korea and the United States. Jung also has a movie “Ryanggangdo Children,” (2011) which marked his debut as a film director.

This time, Jung’s heart is set on changing the youth of South Korea - which he calls “our country” - to embrace their country. He wants to rein in and use the Internet to accomplish it.

“I’m planning to open an Internet portal site where everyone can come and enjoy being patriots for their own country,” said Jung, who said it is a pity that not many South Koreans feel pride in their country.

Jung said that his main goal when he first arrived in South Korea was to let the public become more aware of North Korea.

“The public and the media are only aware of what North Korea is right now. They’re not interested in what can come in the future,” he said. “And so I always wondered why South Koreans hated North Korea so much.” Jung then went on to produce “Yodok Story.”

However, when the warship Cheonan was sunk, things changed.

“I stopped [my efforts to make North Korea known],” said Jung. “I decided this wasn’t the direction that I wanted things to go.”

This was when Jung formed a small group of people to sing songs called “People who risk their lives to sing.” The group focused on making songs - heavily influenced by rap and hip-hop - to criticize the North Korean regime and what it stands for. Jung said that this was part of his personal retort against Kim Jong-il.

“At first I never dreamed of making a portal Web site because it costs too much,” said Jung. “But then came the Yeonpyeong Island attack and I knew I had to do this.”

He has garnered support and help from acquaintances and is well on the way to opening his Web site, which he plans to make available next month near the anniversary of the Korean War.

“I am not someone who is interested in politics,” Jung said. “There is no right or left for me. I am an entertainer. I just want to enjoy what I do.”

To mark the opening of his Web site, Jung is planning a concert called the Korean Pride Rock Festival, which will be held in the youth-concentrated area near Hongik University in Seoul. To fuel his Web site, Jung plans to open a music academy for high school students who aspire of become stars. If they make it through a three-month training period and still want to pursue a career in that direction, Jung said, they will be given opportunities to perform in his works onstage.

“The trillions of won that the government has budgeted for unification can be greatly decreased if the Web site takes off,” Jung said.

The success of the Web site, though, is merely the beginning of Jung’s dreams.

“I really want to go to Hollywood and Broadway,” said Jung, who spent two years in the U.S. studying film and music. His first entry into the country was illegal because he had been denied a visa. He decided to swim across Niagara Falls from Canada and into the U.S. After a few drinks he dove in and made the swim but he was caught and sent back to South Korea. His story was made public and with the help of then-U.S. Ambassador to Korea, Alexander Vershbow, he was able to gain a visa.