The package includes a one -night stay in a junior suite, which can accommodate up to three guests, a complimentary bottle of wine (choice of red or white), an assorted cheese platter and three anti-aging masks. An extra bed is also provided free of charge upon request.

Other benefits of the package include three happy hour coupons, which give complimentary access to the hotel’s bar, Blush, for three people. Guests taking advantage of the package will also be granted free access to various hotel facilities including a swimming pool and fitness club, free in-room Internet access and a late checkout that can be extended until 2 p.m.

The Ladies Friday Night package is priced at 375,000 won per night excluding tax and service charge. This package is not inclusive of breakfast.

Friday to May 29: The Sheraton Incheon Hotel’s restaurant, Feast, is holding a Vietnamese Guest Chef promotion that will feature 60 varieties of authentic Vietnamese cuisine. For the promotion, the restaurant has invited renowned Vietnamese chef Bui Quang Binh from the Sheraton Hanoi Hotel, who will be with the restaurant until May 29. The guest chef will prepare various provincial dishes from Vietnam, including noodle soup pho with beef or chicken. Some other dishes that will be offered as part of the promotion also include grapefruit and prawn salad, fried soft-shell crab with tamarind sauce, grilled duck breast marinated with galangal and turmeric and more.

During the promotion, the restaurant will also hold a prize drawing for guests in which prize winners will be offered a one-night stay at the Sheraton Hanoi Hotel.

Throughout May: The Novotel Ambassador Gangnam’s pub, Gran*A, is offering a special promotional event from 9 p.m. through midnight.

The Golden Time event, which will be held randomly once an hour from 9 p.m. every day features a buy-one-get-one-free offer of Heineken, Guinness or draft beer and a 30 percent discount on a bottle of whiskey and all snacks and cocktails served at the bar. While supplies last, an apple mint plant will be given to all guests making reservations online. 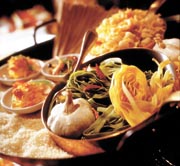 
*Event information is culled from the hotels.