Rain talks entertainment but not military

Rain talks entertainment but not military 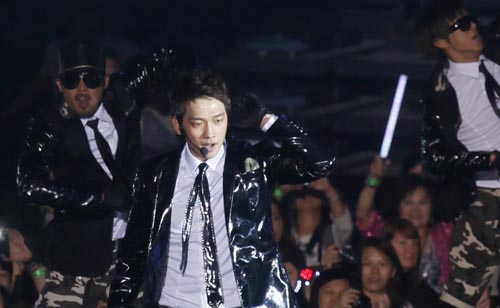 Rain performs during his concert in Macau on Saturday. The star must put his career on hold for two years of mandatory military duty. [AP/YONHAP]


MACAO - In nine years, Rain has gone from an unknown backup dancer to one of Asia’s hottest stars. The South Korean actor-singer also has two Hollywood movies to his credit.

But his thriving entertainment career must be put on hold later this year when he reports for two years of mandatory military duty. It’s a topic the 28-year-old performer doesn’t want to discuss.

Rain is currently in the southern Chinese gambling enclave of Macao for the latest stop of what is likely to be his final Asian tour before his military service and he made sure the media couldn’t ask him about his imminent break from the entertainment industry.

At a news conference, which was delayed two and a half hours, before his concert at the Venetian Macao casino-hotel late Saturday, organizers banned questions that were not preapproved by Rain’s managers. Instead of discussing how the break would affect his career, Rain spoke about Macao and fan reaction around Asia.

He talked about his new movie “Living in the Sky,” in which he plays a pilot, and said he wanted to make more action films and take on romantic roles in TV dramas.

Few details of his military duty have been disclosed but he told Korean media last month that it would start at the end of the year.

All able-bodied South Korean men must join the military for about two years of service sometime between the ages of 18 and 35.

Managers for the Korean star, whose real name is Jung Ji-hoon, refused an interview request in Macao from The Associated Press.

In his short career, Rain has released five Korean albums, a Japanese record and launched a film and TV career. He has also crossed over to America, appearing in a “dance-off” against comedian Stephen Colbert and starring in the Hollywood action thrillers “Speed Racer” and “Ninja Assassin.”

But Rain thinks his entertainment future lies in Asia. “Now America is no longer dominant. Now many Asian movies and songs are very popular. The two regions have the same status now,” he said.

Rain’s fans are confident their idol will emerge from the two-year break unscathed. Several dozen fans were camped outside the concert venue six hours before show time.

“He is a very hardworking person. Serving in the military will improve his determination. It will make him more manly and more mature. His career might take a different direction after his military service but I think he will keep getting better and better,” said 21-year-old university student Zhao Wenwei.