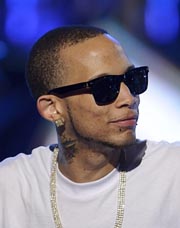 INGLEWOOD, Calif. - M-Bone of the rap group Cali Swag District, which scored a hit last year with the song “Teach Me How to Dougie,” was killed in a weekend drive-by shooting as he sat in a car outside a liquor store, police said Monday.

The 22-year-old Inglewood man, whose real name is Mante Ray Talbert, was sitting in the driver’s seat of his car shortly after 10:30 p.m. Sunday.

“Another car pulled alongside, gunshots were fired and the victim was struck twice in the head,” Lt. James Madia said. A man sitting in the passenger seat of Talbert’s car was not injured, Lt. Gabriel Garcia said.

Talbert was pronounced dead at a hospital.

Lt. Steve Overly said the motive for the attack was under investigation. Several theories have been put forward on social media sites and detectives were following up on some of those to see if they were credible, he said.

Talbert was “the victim of a random act of violence,” Cali Swag District’s publicist Greg Miller said in a statement.

“He was a hardworking, passionate artist and dancer that will be deeply missed,” Miller said.