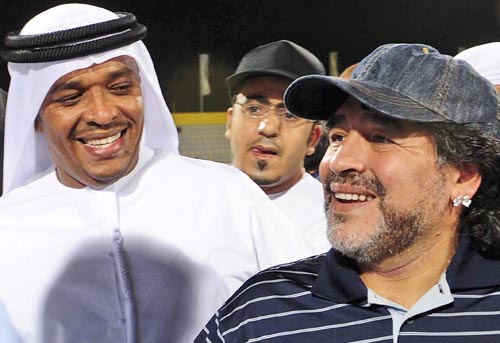 Maradona, who has been out of management since leading Argentina to the World Cup quarter-finals last year, will be in charge when the next season starts in September.

“Al Wasl Sports Club has become synonymous with achievements of this calibre and we are very pleased to be welcoming Maradona to a long line of accolades in the club’s history,” vice chairman Marwan Bin Bayat said in a statement. “This partnership embodies the vision of the club as it embraces forward thinking developments in the region to establish unprecedented standards for the sport.”

The 50-year-old Maradona visited the club’s training facility Saturday and had been in talks for several days. Dressed in a polo shirt, shorts and baseball cap, the tattooed Maradona blew kisses to fans who mobbed him and chanted his name as he watched the team practice.

He didn’t talk to reporters and the club said he left Sunday for Spain to attend his daughter’s birthday party in Madrid. He is expected to return to Dubai next month.

His new team lost 4-0 to league leader Al Jazira on Monday. Huge banners featuring pictures of Maradona and messages welcoming him were on display across the ground and most fans said they felt he could lead the club to a championship next season.

“It’s perfect. He’s got a good story and knows a lot about football,” said Adel al-Mas, a 27-year-old Dubai police officer and lifelong Al Wasl fan. “Next year, the club will be one of the top in the UAE.”

But other fans were not so sure, wondering whether Maradona would gel with the current players and be able to have an immediate impact since he has never worked in the country.

“It will be difficult,” said Nasser al-Qershi, 26, a finance administrator. “He doesn’t know anything about the players. He will have to stay here six months or maybe a year. This is just to get the people excited.”

Al Wasl officials would not disclose details of the contract, saying only that it was for two years and that he would be responsible for leading the club “to new heights.”

Al Wasl is currently fourth in the domestic league, which ends next month, and has been looking for a manager since firing Sergio Farias in March. The top four teams in the league qualify for next season’s Asians Champions League.

The sports club which includes the football team is chaired by Sheik Ahmed bin Rashid Al Maktoum, who is a brother of the Dubai ruler. Al Wasl is considered one of the top clubs in Dubai but hasn’t won anything since 2007 when it won the title of the former UAE league, which included mainly amateur clubs, and the UAE Presidents Cup in the same year. The league turned fully professional three years ago.

The signing of Maradona is one of the biggest for the fledging United Arab Emirates professional league. Last year, Dubai club Al Ahli signed and subsequently fired former Leeds and Aston Villa manager David O’Leary. It also signed former Juventus captain Fabio Cannavaro, who remains with the club though he is out injured.

Carlo Nohra, the league’s chief executive officer, called the hiring of Maradona “welcome news” for a 12-team league that has seen its attendance grow this year by 30 percent.

“Maradona’s football credentials speak for themselves and whilst it’s too early for us to judge what this appointment will mean for the league or the club, his profile and popularity have undoubtedly brought focus to the League, which is as a positive thing,” Nohra said.

Maradona was captain when Argentina won the 1986 World Cup but a ballooning waistline later slowed his explosive speed and he retired in 1997. Before taking over as manager of Argentina in 2008, he had only managed Deportivo Mandiyu in 1994 and Racing Club in 1995 and in both cases left before his contract was up.

Under Maradona, Argentina’s results were mixed and the team slumped to two of its worst losses - a 6-1 hammering by Bolivia in World Cup qualifying and a 4-0 quarter-final loss to Germany at the final tournament in South Africa.