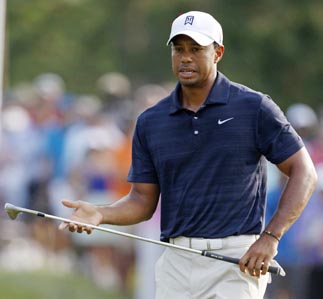 PONTE VEDRA BEACH, Fla. - Tiger Woods says he didn’t do any more damage to his left leg at the Players Championship and expects to play the U.S. Open next month.

Woods made it only nine holes last week at the Players - his shortest tournament ever - when he withdrew after nine holes because of what he described as a chain reaction of pain from his left knee to left Achilles and tightening in his calf. He shot 42 on the front nine.

On his Web site Monday, Woods said he irritated the knee and Achilles without making them worse. He said doctors have advised rest, cold water therapy and soft tissue treatment, which he said he already had been receiving.

“Aggravating my injury is very disappointing,” Woods said. “I’ll do whatever is necessary to play in the U.S. Open, and I’m hopeful I can be there to compete.”

He did not say how long it would take to recover.

Woods reported a mild sprain of the medial collateral ligament and a mild strain of his Achilles from hitting a shot off the pine straw under the Eisenhower Tree on the 17th hole of the Masters in the third round. He played the final round and shot 67.

He said he did not practice until Monday of the Players, and did not play any golf until his practice rounds. Woods looked fine during the 9-hole practice rounds he played last week, and swing coach Sean Foley said he was pleasantly surprised to see Woods look as though he had not lost much from when he last played in the Masters.

Woods said he hurt himself on the opening tee shot at Sawgrass.

“The knee acted up, and then the Achilles followed after that, and then the calf started cramping up,” Woods said after he withdrew. “Everything started getting tight, so it’s just a whole chain reaction.”

If he plays at Congressional, he likely will have played nine holes of competition between the Masters and the U.S. Open.

Minutes before the statement was posted on his Web site, Woods said on Twitter, “Bummed that my left leg has me on the sidelines, but I want, and expect, to be at the U.S. Open. Will do all I can to get there.”

It would not be the first time Woods has played the U.S. Open with so little competition. When he won his last major at the 2008 U.S. Open, he had not played a tournament in two months because of arthroscopic surgery on his left knee immediately after the Masters. Doctors later discovered stress fractures in his left leg. Woods wound up winning at Torrey Pines in a 19-hole playoff.