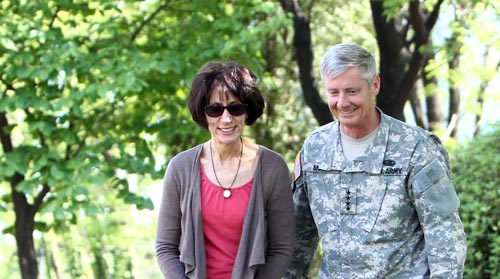 Gen. Walter Sharp, right, and his wife Joanne walk at their official residence, the Hilltop House, on the U.S. military’s Yongsan Garrison, Monday. By Kang Jung-hyun


Praising the Korean military’s remarkable progress of the over the past decades, Gen. Walter Sharp, the top U.S. military commander in Korea, expressed confidence in the ongoing reform of Korean forces and predicted that improved coordination among the three branches will be achieved in time for the transfer of wartime operational control to Korea in 2015.

Sharp, the commander of United States Forces Korea, met with the JoongAng Ilbo and the Korea JoongAng Daily - his first interview with a local newspaper - at his official residence, Hilltop House, at the U.S. military’s Yongsan Garrison, Monday. His wife Joanne joined the interview.

Wrapping up a 37-year military career, Sharp, who is also commander of the U.S.-Korea Combined Forces Command and the United Nations Command, is set to retire in July.

Following the sinking of the Cheonan warship in March 2010 and the shelling of Yeonpyeong Island last November, South Korea unveiled a defense reform plan in March to streamline its command structure and beef up the military’s fire power.

Sharp said the idea of the reform to pursue “jointness” among the Army, Navy, Air Force and Marine Corps is the exactly right thing to do.

“It is a difficult transition,” he said, adding that the U.S. military underwent a similar process in the 1990s.

“It took us a decade to do it, but it paid such huge dividends in fighting capabilities, and in the long run, it is cheaper because you don’t have to have any redundant systems. You can count on each other to do that,” he said. “I very much encourage the continued development of the defense reform plan and actually making it happen.”

Stressing the importance of the “jointness” of the military, Sharp said reform of the U.S. military was ordered by Congress in 1986. The U.S. military started benefitting from improved efficiencies during Operation Desert Storm in 1991, he said. By the time of the Iraq War, “We really learned how to be truly joined and work very closely together,” he said.

He said it was important for the National Assembly to understand the reform plan and properly fund it.

“And the biggest enabler to make us more ‘joint’ is a very strong command and control system,” he said, stressing the need to build an interoperable system to command across the entire military.

He said senior leaders’ determination to carry out reform is also critical to its success, warning against resistance toward restructuring.

Korea’s military became bulky and bureaucratic since it was last restructured in 1991 and Korea is seeking to complete the new reforms by 2030.

To cut away dead wood, roughly 60 generals and 1,000 executive positions will be eliminated in the next decade.

Sharp also said the planned U.S. handover of wartime operational control to Korea in 2015 is taking place at a significant time. He said the three-year postponement from 2012 was decided not because Korea wasn’t ready, but because many important events will be taking place in 2012.

The United States and Korea will have presidential elections next year, and China’s leadership will also be changed.

“We will like to take advantage of the extra time to make it even stronger,” Sharp said, adding that the U.S.-South Korea alliance will be even stronger and more efficient after the transition.

He also noted that the two attacks by North Korea last year, especially the attack on Yeonpyeong Island, changed Korea for the perceivable future.

While some doubted that the North was behind the sinking of Cheonan, despite proof presented by Seoul and Washington after an international investigation, there was no denying the Yeonpyeong Island shelling, he noted.

“People with smartphones watched live as North Korea’s artillery killed marines and civilians,” he said. “It made it very clear that North Korea is capable of attacking and willing to attack in order to get what it wants.”

He said the South Korean people realized after the two attacks that the North won’t give up the cycle of staging attacks and demanding aid.

“The big thing that changed was that the people said, ‘We’re not going to stand it anymore. North Korea must change before we give it anything,’” he said. Sharp urged North Korean leader Kim Jong-il to choose a path to “open up the country and treat the people humanely” and “give up nuclear capabilities.”

“We are not after a regime change,” Sharp said. “We are after a change in the way the regime acts.”

Sharp pointed out that the Yeonpyeong Island shelling also prompted a demand in the South for a stronger response.

“I know the plans, and they will be quick and strong to stop any attack that is coming,” he said. “The South Korean military has done a lot of work since November to prepare for any future attacks.”

The U.S. military is working closely with the South to come up with strong counter-provocation plans, he said, including agreements on what immediate responses should be and ways to prevent the situation from escalating, he said.

Sharp said U.S.-South Korea joint military exercises, particularly the most recent Key Resolve exercise, are designed to handle different types of North Korean attacks, such as conventional attacks like the Yeonpyeong Island shelling and attacks that are hard to pin on the North, as well as nuclear and missile tests.

He said the U.S. military here had the opportunity to work closely with U.S. Ambassador to Korea Kathleen Stephens and her team, as well as the South Korean military, the Ministry of Foreign Affairs and Trade and the Blue House national security team.

“The real strength that the U.S. and Korea have is to look more holistically at the North Korean threats,” he said.

He also shared concerns about the North’s “asymmetrical threat,” which refers to small, isolated attacks against a Southern army armed and trained for general warfare.

“We are convinced that the North will be defeated if they try an all-out attack,” he said. “It would cause a lot of damage, but they will be defeated. That would mean the end of the North Korean military and I think Kim Jong-il sees that. So, we’ve got to make sure that we are prepared for asymmetrical attacks. That’s what we are doing for the great majority of our efforts right now.”

“For many years, Korea received aid from other countries, but now Korea is a donor country. It is giving back to the world,” he said, pointing to the Korean military’s peacekeeping missions in Lebanon and Haiti, the reconstruction team in Afghanistan and the anti-pirate operation off Somalia.

While the threat from North Korea remains the number one rationale for the U.S.-Korea alliance, such a global vision allows Korea to earn more support from the international community.

That sends an even stronger message to the North, he said.

“When Joanne and I first got here in the summer of 2008, we had 1,800 families here in Korea. Today, we have a little over 4,200 families” he said. “When families come, service members stay two and three years rather than one. Many single soldiers are also volunteering to stay two or three years.”

Having soldiers for a longer period of time increases the capabilities of the military, he said.

“You don’t have to train new soldiers every year. You can imagine how much stronger our units are. It also shows to North Korea that the United States is committed, that we are not leaving,” he said. “We wouldn’t be building all this infrastructure, schools and all for our families, if we were leaving in 2015. That has a deterrent effect on the North.”

Recalling his time in Korea, Sharp said he has a strong belief in the capabilities of the South Korean military and the determination of its soldiers.

While most soldiers in the South have some college education and understand clearly their obligations to serve the country, the North’s troops are serving with guns pointed at their heads, he said.

He also said compared to his first tour of duty here in the 1990s, the Korean troops have progressed significantly in terms of professionalism and the ability to handle crises.

Expressing mixed emotions in wrapping up a 37-year career, Sharp said his post in Korea is the perfect place to retire.

“One of the things I am going to do is try to stay connected to the Korea-U.S. alliance to strengthen it in the future,” he said. “Whether it is a direct participation, talks, a think tank or speeches, I really want to do that.”