To June 10: This is an exhibition by artists Lee Moon-ho and Han Kyung-woo.

Exhibitions normally show what people see, but “Blind Spot” aims to portray what people do not see - their blind spots.

Media is everywhere, in the form of photos, TV sets and in other confined spaces. What people normally witness through these square or rectangular screens is limited because of the controlled and restricted angle and space around the image. Lee and Han flip over the unseen areas of these spaces, revealing their blind spots. 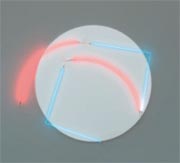 To June 19: This is a solo exhibition of French artist Francois Morellet, who uses geometric forms to create abstract, minimal works.

The title of the exhibition, “Senile Lines,” is a palindrome. For Morellet, the senility of lines represents the idea that his final lines are, in his own words, apparently no longer in line with his usual logic.

Morellet began using geometric shapes as part of his artwork in 1952; since then, the works have developed in form and structure.

In these works, Morellet exploits the contrast of two opposing components, the line and the stripe.

The general title of these works is “Strip-teasing,” simultaneously implying the removal of clothing and the teasing of the stripes in his pieces.

To June 26: This exhibition features around 45 works of paintings, sculptures, new media and photography by 24 iconic artists, including Koreans Kim Tschang-yeul and Kim Sooja and American video artist Bill Viola.

Included in the collection is the world premiere of Kim Sooja’s video piece “A Needle Woman,” which has never been shown in its entirety. The video, which took three years to make, consists of eight channels. Each channel shows Kim in a different city - Tokyo, Shanghai, Delhi, New York, Mexico City, Cairo, London and Lagos, Nigeria - and the videos all start and stop simultaneously. In each video, Kim stands as straight as a needle amid pedestrians on the street. As a whole, the piece portrays the artist’s growing distance from ordinary people.

To Sept. 25: For the first time in Asia, viewers will have a chance to see the art behind the scenes of classic Disney films from the entertainment giant’s 80-year history.

Among the 600 pieces on display are original concept artworks, sketches, storyboards, final-frame cells, background paintings and movie clips from the Walt Disney Animation Research Library. Included in the collection are works by famous illustrators such as Mary Blair and Kay Nielsen.