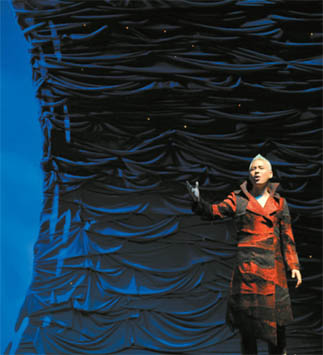 If a “high-tech” musical about one of the most revered thinkers in Korean Buddhism strikes you as strange, you are not alone. Last month’s premiere of “High-tech Musical Wonhyo” had me feeling skeptical, too.

The show was produced by broadcaster MBC to commemorate its 50th anniversary. The broadcaster is hoping it will become a Korean musical theater classic, it said in a press release by MMCT, its public relations agency, and plans for an overseas tour are in the works.

The show has colorful costumes and high-tech elements. But they don’t work in service of the story, which is about Wonhyo (617-686) and is set in the Silla Dynasty (57 BC?935).

In the musical, Wonhyo (played by more than one actor) is an handsome young man with intelligence, humor and a tendency to flaunt the rules. Rather than staying all day in the temple, he wanders from the mountains to the markets and even visits a house full of gisaeng courtesans.

Yoseok, a daughter of aristocrat Chunchu, who later becomes King Muyeol, falls in love with Wonhyo but is heartbroken when he decides to leave Korea to study Buddhism in Tang Dynasty China with fellow monk Uisang. 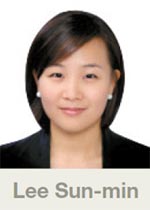 On the first night of the monks’ journey, a rainstorm hits and they take shelter in a dark cave. Later that night, Wonhyo wakes up in complete darkness with a raging thirst to find what he thinks is a gourd full of water. He offers it to Uisang and the two drink the whole thing. The next morning, they wake again to find out that the cave is a tomb and the gourd was a skull. Wonhyo’s misperception of his own experience leads him to realize how different things can be depending on how one sees them and he decides to give up his travel plans, and his religious ambitions, to be with Yoseok.

Wonhyo was highly esteemed in real life, but in the musical, he seems more like a mischievous young man who doesn’t take things seriously. Part of the problem is the actor’s portrayal, which was too light to be believable.

As advertised, there are a few “high-tech” elements in the show, including LED lights that recreate Wonhyo’s temple, but to me, they didn’t make the musical look much different from any other.