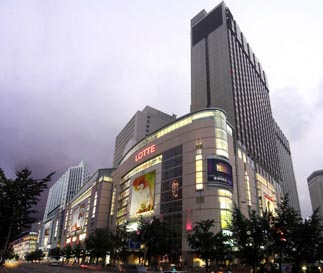 A night view of the flagship Lotte Department Store in Seoul.

This ranking by the leading U.S. economic magazine came shortly after Lotte Department Store, a Lotte Shopping subsidiary, declared its “2018 Vision, Global Top 10” during its 30th year foundation anniversary celebration, held in November 2009, and then raised its sights to aim for the ‘Global Top 5’ in April 2011. Lotte Department Store has 34 branches, including ones in Moscow and Beijing.

The new goal of cracking the global top five will be advanced by opening 40 overseas branches by 2018, including stores in Vietnam, Russia, Indonesia and China, and increasing the contribution of overseas sales to 25 percent of total sales.

Forbes has been ranking “The Global 2000” annually since 2003, grading companies based on sales, profits, assets and market value.

In addition to the honors for Lotte Shopping among its retail competitors, the company jumped 46 places in the overall “The Global 2000” rankings, to 586th from last year’s 632nd.

According to Forbes’ valuation, Lotte Shopping had $21.1 billion in assets, $13.7 billion in sales, $614.1 million in net profit and $11 billion in market capitalization.

Among the top 2000 firms according to Forbes, 19 famous department stores are listed. The top three were PPR, Kohl’s and Macy’s, in that order. Lotte Shopping was the only Korean retail company on the list, and shared its sixth-place ranking with Falabella of Chile.

In separate honors, Lotte Shopping also shone in the Dow Jones Sustainability Indexes, which evaluate companies based on financial results, environmental management and social contributions. Companies are cited on the basis of expectations that they will show continuous sustainable management, and the indexes have become a global standard.

BMW (automobiles and parts) and Nokia (technology) were named as supersector leaders in addition to Lotte Shopping.

Lee Chul-woo, the CEO of Lotte Shopping, commented, “Lotte Shopping is growing into a great company by firming its inside and outside, stepping up into a global company exceeding a local company and also fulfilling its social responsibility at the same time. Even in the future all of our employees will continue our efforts to challenge so that we can become a world-famous company.”