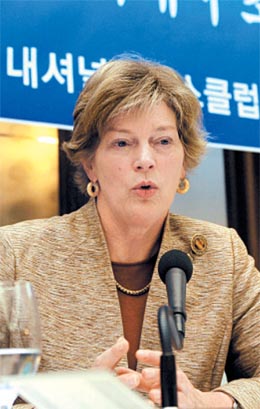 The U.S. ambassador to Seoul said yesterday it is North Korea’s turn to act for the resumption of six-party talks.

Kathleen Stephens was responding to a question at a local journalists’ gathering in Seoul, as to whether the lack of action from the North regarding inter-Korean talks may be because Washington does not assure it will have a bilateral high-level meeting with Pyongyang.

China, after meeting with North Korea’s visiting envoy last month, suggested a stage-by-stage process for the resumption of six-party talks.

The talks would start with inter-Korean talks and then North Korea-U.S. talks.

The North has expressed no opposition to the suggestion but is yet to respond to Seoul’s call for inter-Korean talks made in January.

Stephens said the United States is waiting for the North to show its sincerity for talks.

“You can hear words that we want to have a dialogue but you want to see actions.

“But do you want to tell someone what you have to do, A, B, C, publicly? Probably not,” she said.

“You want to give a little room for a kind of action to demonstrate seriousness of purpose, or maybe in a Korean context, sincerity.

Stephens said the Sept. 19, 2005 statement made in the six-party talks, under which the North pledged denuclearization, remains a relevant and important vision and the U.S. is working with other members of the six-party talks to pick up where they left off to pull the North out of “a dead-end road.”

The talks, involving the two Koreas, the U.S., Japan, China and Russia were stalled in April 2009 with Pyongyang’s withdrawal.

She said the other parties also need to be assured of the North’s readiness to implement commitments to live up to international obligations but Seoul, which suffered provocations last year, deserves meeting the North first.

“We’re also prepared to engage bilaterally but I think we have been very clear that we want to see first and foremost the improvement in atmosphere of the North and South,” she said.