Winter Games host all up to IOC now

Winter Games host all up to IOC now 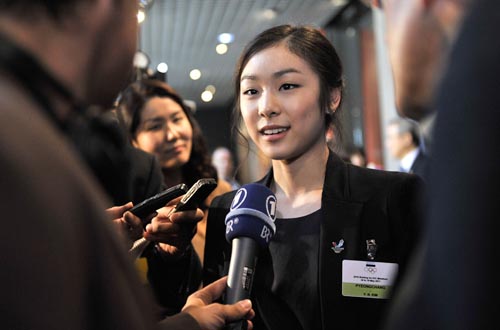 Korean Olympic figure skating champion Kim Yu-na speaks with the media in Lausanne, Switzerland, on Wednesday, after Pyeongchang’s presentation to the IOC to host the 2018 Winter Olympics. [AFP/YONHAP]


Pyeongchang successfully passed the most crucial stage of the 2018 Winter Olympics bid campaign on Wednesday after making its pitch to International Olympic Committee members at the Olympic Museum in Lausanne, Switzerland.

Pyeongchang, making its third consecutive bid to host the Winter Olympics, after failing to win the 2010 and 2014 Games, was last to make its technical briefing behind rival cities Munich and Annecy, France, but the Gangwon town delivered its message that it’s ready to host the Games after a decade of preparation.

“We are very delighted that we could deliver our message directly to the IOC members,’’ Cho Yang-ho, head of the Pyeongchang bid committee, said to reporters after the closed-door presentation. “I think we showed our strengths.”

In the 45-minute presentation, Pyeongchang emphasized its compact two-cluster venue plans that would allow athletes to move from venue to venue in a short amount of time.

The Gangwon town also showed a video clip featuring President Lee Myung-bak ensuring that the Korean government is set to meet all the requirements from the IOC and that hosting the event is part of the national agenda.

After the presentation, Pyeongchang faced a 45-minute question and answer session. The IOC questioned the bid committee about the relative unpopularity of winter sports in Korea, but committee members said they are working on a project called “Drive the Dream,” which would help boost the popularity of winter sports in Korea over the next seven years.

“The questions weren’t as difficult as we thought,” said Minister of Foreign Affairs and Trade Kim Sung-hwan, who was one of the six Korean presenters at the briefing. “Most IOC members were very friendly [to us].”

In previous presentations, Pyeongchang’s main challenger, Munich, was questioned about whether there was enough public support from the Garmish-Partenkirchen area - where the venues for the Munich Olympics would be built - while Annecy was probed about concerns regarding travel time between Olympic venues. IOC President Jacques Rogge said that the three candidate cities received a total of 27 questions - nine for Pyeongchang, seven for Munich and 11 for Annecy.

Pyeongchang has an 87 percent public approval rating in Korea, according to an IOC evaluation report, and is considered by many as the front runner for the 2018 Winter Games, but Rogge said it is going to be very tight race until the end.

“Don’t ask me numbers, but it’s going to be a close race definitely.” Rogge told Reuters. “I don’t expect a big gap between the three cities.”

During Wednesday’s presentation, Korea sent six panelists at the table to represent Pyeongchang.

But among the Korean representatives, Kim Yu-na was possibly the most popular star at the scene. The 20-year-old figure skater was already in the media spotlight with German figure skating legend Katarina Witt, a former Olympic gold medalist who leads the Munich bid committee.

“I was so much more nervous than when I was competing in the Olympics, but I think it went well,” Kim told The AP. “I made a little bit of a mistake, but nobody noticed, I hope. I’m very satisfied and happy that I did well.”

IOC members were impressed with the way Kim handled herself during the presentation. “To have Miss Kim presenting as fluently and as wonderfully well as she did, it was very good for Pyeongchang,” British IOC member Craig Reedie told The AP after listening to Kim’s presentation.

Kim has served as honorary ambassador for Pyeongchang for more than two years and prepared for her presentation after taking the silver medal at the World Figure Skating Championships in Moscow last month.

Wednesday’s presentations were the first and last opportunity for three candidate cities to show off their platforms directly to the IOC members before they cast their final vote in Durban, South Africa, on July 6.