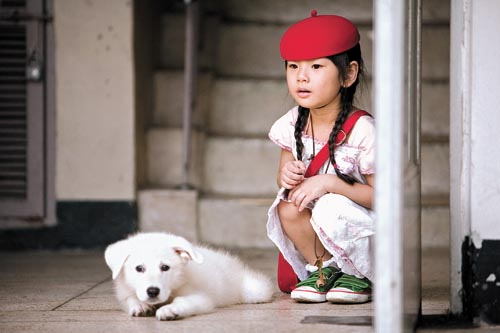 The opening film in this year’s Green Film Festival is “I’m Sorry, Thank You,” an omnibus film made with the participation of four Korean filmmakers who each contributed a short film about the relationship between humans and their pets. Provided by the organizer


Environmental issues are everywhere these days. From foot-and-mouth disease, which resulted in the deaths of more than 3.5 million animals in Korea earlier this year to the radioactive leak from Japan’s Fukushima Daiichi nuclear power plant in March, environmental issues have become everyone’s concern.

The 8th Green Film Festival in Seoul, which began on Wednesday, is hoping to build on the increased awareness of these issues and continue dialogue.

The festival screens 140 films from 33 countries on numerous issues, like abandoned pets and the recent radioactive leak.

The opening film is Korea’s “I’m Sorry, Thank You,” an omnibus film by four filmmakers who each contributed a short film based on the relationship between humans and their pets.

According to relevant groups, including Korea Animal Rights Advocates, there are about 10,000 pets in Korea, meaning that an average family of four has one, whether it is a dog, cat or an exotic animal such as an iguana. But pets are continuously being abandoned for diverse reasons.

The film explores the causes and people behind the issue, which has grown increasingly serious of late.

The filmmakers are known for their involvement in animal rights, including Lim Soon-rye, who is an advocate for KARA, and Park Heung-sik, famous for lyrical films such as “My Mother the Mermaid” (2004).

Among the four short films, Park’s “My Younger Brother” depicts a 6-year-old girl’s separation from her dog, which she treats as an imaginary sibling. When the girl’s mother gets pregnant with her second child, the family decides to put the dog up for adoption, a frequent occurrence in Korea.

“Catty Kiss,” directed by Lim, focuses on the harsh lives of abandoned cats. The film tells the story of an old maid who regularly takes in stray cats, a hobby that becomes a source of conflict with her father, who can’t understand why she pours so much of her money, time and effort into caring for the cats, which have traditionally been regarded with suspicion in Korea.

The troubled relationship between the father and daughter, however, begins to turn around as the two take care of the cat together.

The festival screens films in nine sections, including a competitive one for environmental films from abroad called Green Competition.

According to the organizer, this year’s program is more diverse than in past years, when most of the entries were documentaries. This year’s festival features films in a variety of formats including documentaries, animation, music videos and musicals.

The section called “Children of the Earth” features family-oriented films, including the Swiss short “Moving Forest.” The film tells the story of an 11-year-old boy who can’t live without his handheld game device. One day, the boy becomes curious about a tree in his backyard that is surrounded by concrete walls. Carrying the tree in a wagon, the boy heads to the forest.

The “Animal, Our Sweet and Wild Companion” section focuses on abandoned animals, while the section “Eco Fantastic” is designed for newcomers to environmental films. These films blend sci-fi film techniques with environmental subjects making them appealing for a general audience.

The festival also offers some serious topics for die-hard environmentalists to chew on. This year’s “Focus” section offers an in-depth look at nuclear power and films dealing with climate change and desertification.

The “Green Panorama” section, meanwhile, introduces festivalgoers to recent environmental trends. Among the films, “Soundtracker” by U.S. director Nicholas Sherman, an award-winning sound recordist, captures his struggle to find natural sounds in a noisy world. The “Korean Eco-Panorama” section screens the latest green films from the past year.

The Green Film Festival in Seoul has grown rapidly. The audience once consisted of industry insiders and opinion leaders. But increased awareness about the environment has attracted a wider range of viewers.

“Now the audience is diverse. From activists and opinion leaders to moms interested in food safety on behalf of their children, they all come to enjoy the festival,” said Kim Sun-hee, a festival organizer. “Also, there were many incidents such as foot-and-mouth disease that led people to think about these issues more seriously.”

*The 8th Green Film Festival in Seoul runs through May 25. The screening venue is Sangam CGV in Sangam-dong, Mapo District, central Seoul. Tickets are 5,000 won ($4.50) for adults and 3,000 won for teenagers. Online ticketing is available at www.cgv.co.kr. For more detailed information, visit www.gffis.org or call (02) 2011-4329.