Preventing another golden age of piracy

Preventing another golden age of piracy 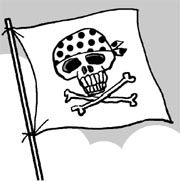 Pirates have a long, long history. It is safe to assume that acts of piracy date to when people made ships and went out on voyages. In fact, the oldest historical record of pirates goes back to 1400 B.C. Raiders known as the Lukka, based in Asia Minor, now modern day Turkey, began their pirate operations in ancient times. The history of trying to stop piracy is just as long. In 700 B.C., Assyrian kings sent an expedition to sweep the sea of the pirates who interfered in trade with India and China. There is a record that Roman General Pompey led a campaign in 67 B.C. to rid the Mediterranean Sea of piracy.

Strict punishment and legal action against pirates began around the late 17th century and early 18th century, which was the golden age of piracy. European countries, the colonies in America and Caribbean states all legislated maritime laws and installed maritime courts to process the crimes in a timely manner. Pirates usually received the death penalty. While punishment used to be limited to pirate captains and leaders, the entire crew was often executed. Most notably, 54 pirates were captured and tried in West Africa in 1722, and all of them were executed together, wrote Angus Konstam in “Piracy: The Complete History.”

The executions were also a warning. The bodies were put on public display. It was a warning, and a threat, that if you engage in piracy, you would meet the same fate. However, it also made the pirates resist and fight back desperately because they knew they would suffer greatly if they were caught.

Nevertheless, not all pirates were treated with cruelty. In 1722, the king of France pardoned pirates who turned themselves in and helped them lead a new life.

Five Somali pirates who were captured by the Korean military after they took over the Samho Jewelry are going to stand trial at the Busan District Court next week. It is an unprecedented trial in Korean legal history, and the country is watching closely.

Hopefully, the court will hand down an exemplary decision to send a warning to pirates, who are part of a serious problem in international society.

Piracy is one of the United Nations’ grave concerns, with 90 percent of pirates captured in the Indian Ocean getting released without punishment. A fair trail and strict punishment will help prevent the advent of a modern-day golden age of piracy.