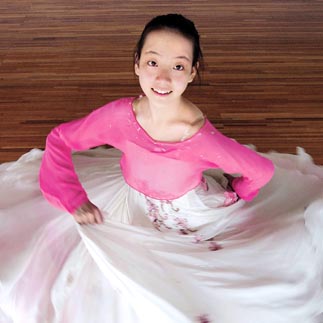 From that moment on, the younger Kang decided to train until her feet become as worn as those of her role model.

Kang’s mother, Kim Ae-ja, said that when a visiting professor from Ewha Womans University, Seo Yeong, met Kang while teaching elementary school students in 2008, Seo said: “From her head to her feet, her body is perfect for a ballerina. I think she must become a ballerina.”

Seo’s words encouraged Kang, who started ballet lessons as a beginner when she was 11-years-old, taking after-school classes run by the elementary school she attended.

When Kim saw her daughter’s first performance, she said she was surprised to see her daughter, who used to be shy, perform on stage.

“When she performs, she’s not nervous and keeps smiling,” Kim said. “She didn’t look like the daughter I knew. From that time, I decided to support her becoming a ballerina.”

But when Kang was preparing to enter middle school in late 2009, Kim felt a huge financial burden to support her daughter’s private ballet classes and competition preparations.

Kim and her husband have been separated and she said she did everything to support Kang and two other daughters, including operating a street-food restaurant and working as a daily laborer. Kim has also been suffering from cancer for six years, which has made her weak and has made it hard on her to support her daughter’s dream.

Kang was forced to quit her private ballet lessons.

“When I wasn’t practicing ballet, I was always thinking of ballet,” Kang said.

“I even dreamed at night of performing ballet. For the five months that I took a break, I realized how much I liked ballet.”

Shortly after Kang ended her lessons, Kim applied for a scholarship program run by the nonprofit Green Umbrella Child Fund.

Finally, in May 2010, she got a scholarship from the fund and resumed ballet classes. Nowadays Kang practices traditional Korean dance combined with ballet.

Whenever she has difficulties training, she said she keeps remembering her role model who left Korea at the age of 16 to study ballet abroad.

Expressing her admiration for the ballerina, the young Kang sent the professional an e-mail.

“Whenever I watch a video of your performance, I am deeply moved by your beautiful movements,” Kang said in the email. “I want to meet you someday.”

“Your endless passion for ballet will help you overcome harsh competitions and help you from falling into depression,” the Kang said in the reply.