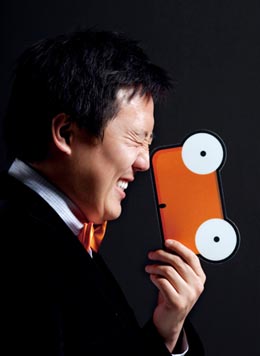 Social commerce sites including Ticket Monster, the nation’s first and leading social commerce firm with an estimated market share of more than 60 percent, were recently put under the microscope of the anti-trust agency because consumer complaints about a lack of consumer protection measures have risen. Ticket Monster, too, was fined 10 million won ($9,210) by the Fair Trade Commission last week for infractions including false advertising.

Social commerce involves mass selling to groups on social media networks such as Facebook and Twitter by offering discounts to gain high-volume sales.

“Social commerce is one of the industries that have grown most rapidly in Korea,” Shin said. “The recent measures taken by the Fair Trade Commission should be perceived as trial and error for further industry development.”

Ticket Monster was founded more than a year ago. It started by selling four bottles of Castle Praha beer and handmade sausages for 25,000 won, which was a 50 percent discount. The company sold around 110 coupons, it was considered a success, and it began to take the lead among competitors established soon after.

In the last year, the nation’s social commerce market experienced rapid growth. There are currently more than 500 firms dealing in social commerce. By the end of the year, the market’s volume is expected to be 300 billion won.

Ticket Monster’s turnover was 18 billion won last month and it expects that to reach 20 billion won this month.

As a leader in the industry, Shin shared some of the company’s growing pains.

“We should have had more employees dedicated to corporate service than we had initially allocated,” he said, noting the lack of product quality management. “For example, there were times when we sold a pizza with a diameter of 10 centimeters (3.9 inches), but the size of the pizza that was actually delivered to customers was 9 centimeters.”

He said Ticket Monster is trying to establish a system so that its employees are responsible for product quality.

Regarding criticism that Ticket Monster’s aggressive television marketing campaign is somewhat contradictory to a consumer-based, word-of-mouth system that social commerce is known for, Shin said, “It’s an investment for the future.”

Shin is working on social commerce location-based services, which allow customers to receive coupons from stores that are nearby.