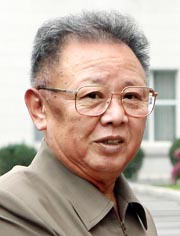 The visit, which, if confirmed, would be Kim’s first trip to the North’s closest ally in nine months, came unexpectedly. Initially, his son and heir-apparent Kim Jong-un was thought to be in the train, not Kim Jong-il. Whether Kim Jong-un was accompanying his father on the trip is yet to be confirmed.

The source said the train crossed the border from Namyang, North Hamgyong, passed Tumen in Jilin Province, and is believed to have arrived in Mudanjiang, Heilongjiang Province.

When a special train trip by a North Korean figure was observed earlier in the day, local media speculated that it was an entourage for Kim Jong-un because the trip came amid widespread expectation of his visit to China.

A potential visit to China by Kim Jong-un - which some speculated would be a closing touch on the second-generation hereditary power succession for the reclusive regime - was suspected to be imminent when about 20 North Korean special agents, believed to be preparing for a high-profile North Korean figure to visit to China, were detected arriving in China in early May.

Chinese envoys visiting Pyongyang in recent months, including State Councilor Dai Bingguo and Minister of Public Security Meng Jianzhu, were known to have delivered a message from Chinese President Hu Jintao to invite North Korean leaders to China. That invitation was believed by local analysts to be for Kim Jong-un.

“We have been closely watching Kim Jong-un’s possible visit to China after China was known to have made an invitation,” Unification Ministry spokesman Chun Hae-sung said at a media briefing yesterday.

But Chun did not confirm Kim Jong-un’s visit to China, citing no official announcement from the North or China.

The surprise visit by Kim Jong-il, his third trip in a year, would include another pilgrimage, given the expected itinerary, observers speculated.

Entering China via Tumen was a new choice for Kim, although he chose the city as a route to return to the North after his trip to China last August.

Kim’s August trip, his sixth visit to China since 2000, the reclusive leader took the Manpo-Jian route. This time, he is expected to reverse the routes he took in August.

From Mudanjiang, he is expected to visit some cities in Heilongjiang and Jilin, mythologized by North Korea as a sacred place where a young Kim Il Sung supposedly launched influential anti-Japanese activism.

Kim Il Sung is known to have attended Yuwen Middle School in Jilin between 1927-1930, when the Korean Peninsula was under Japanese colonial rule.

A statue of the North Korean founder stands on the school grounds.

The province has other anti-Japanese shrines, including Beishan Park, where remains of independence fighters are buried.

Kim Jong-il visited Jilin during his last visit to China, made from Aug. 26-30 last year.

There was speculation that Kim Jong-un also accompanied his father during that trip, but it has not been confirmed.

The itinerary could have an economically driven purpose.

The Changchun-Jilin-Tumen region is under special state management, and China plans to develop the area into a Northeast Asian economic hub.

Who Kim Jong-il might meet in China remains an open question, but some observers believe it could be Hu.

All six times he’s visited China since 2000, Kim Jong-il has met the Chinese leader. He met Hu in a Changchun hotel last August.

This visit would feature a Kim-Hu summit at the same time that President Lee Myung-bak plans to meet Chinese Premier Wen Jiabao during the Korea-Japan-China summit to be held today and tomorrow in Japan, which some observers speculate could be behind the real intention of Kim Jong-il’s visit to China.

Some observers speculate that the unexpected visit may imply the severity of food shortages that the North is experiencing.

When he met Hu in May and August last year, Kim was known to have requested economic assistance.

The leadership in the North is known to be striving to meet its pledge to make a “strong and prosperous” nation next year, which is the 100th anniversary of Kim Il Sung’s birth.

Stalled discussion toward resuming the six-party talks could have prompted Kim’s unexpected visit.

Last month, China, the chair of the multinational talks on the North’s denuclearization, proposed a three-stage formula to restart the six-party talks - inter-Korean talks, Pyongyang-Washington talks, then six-party talks.

Seoul, Washington and Tokyo have responded positively to it.

Pyongyang, hoping to return to the six-party talks, has yet to respond to Seoul’s call in January for inter-Korean talks and the North may need to coordinate with China about the issue.

Among other possible items on Kim Jong-il’s agenda could be President Lee’s recent proposal for Kim Jong-il to attend the nuclear security summit to be held in Seoul in April 2012, if he expresses a will to denuclearize.

Meanwhile, Daily NK, a Seoul-based media outlet specializing in North Korean news, quoted a source in the North as saying that heavy security measures were implemented beginning Thursday night near the border with China.

“An order was made to refurbish the railway from Pyongyang to the Tumen River around April 20 and the residents and the employees of railway authorities have been mobilized every day since then to clean the edges and lay ballast [on the railway],” a source in Chongjin, a northeastern North Korean city near the Tumen River border with China, was quoted as saying by Daily NK.

The Chinese media kept mum about Kim Jong-il’s visit, as they usually do when a high-profile North Korean figure visits China.