One round for the kids

One round for the kids 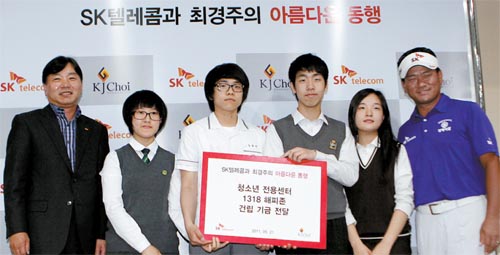 Korean golfer Choi Kyung-ju, far right, poses with students during the “Beautiful Companion” ceremony Saturday at Jeju Pinx Golf Club in Seogwipo, Jeju Island, after announcing he would donate 100 million won ($92,380) to build a youth center in North Jeolla as part of a project to build other such centers around the country. Choi tied for 12th place at the SK Telecom Open, which finished early yesterday because of fog. Third-round leader Kurt Barnes of Australia automatically took the event with a 14-under 202. Photo provided by SK Telecom