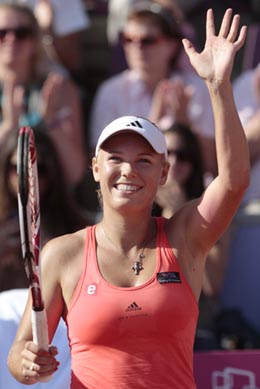 It was Wozniacki’s fourth tournament victory this year, unmatched on the WTA Tour, and her first win on red clay, which was also a welcome boost ahead of the French Open.

Starting sluggish following a tough three-set win over Francesca Schiavone late Friday, the Dane found her touch and fighting spirit as of the second set against the 31st-ranked Chinese.

The only drawback was that Wozniacki needed medical treatment on her left groin in the third set before clinching victory.

She played the rest of the match with a cream-colored bandage around her left thigh but insisted it would not affect her opener at Roland Garros against a player twice her age, 40-year-old Kimiko Date-Krumm of Japan.

“It is fine. There are no big problems. It was a small pain. I just didn’t want it to get bigger,” she said.

With two tense three-setters in as many days, Wozniacki played more than five hours of top tennis in just over 24 hours before heading for Paris.

She insisted the draining matches would not affect her.

“I feel in good shape. I don’t feel tired at all. I am full of confidence,” she said.

Wozniacki looked tentative throughout the first set and committing five double faults was only part of her problem.

She found it tough to focus and get the length on her groundstrokes right as the wind rustled through the plane trees lining center court.

In contrast, Peng played with abandon, looking for the inside of the lines with her two-handed forehand and backhand.

While the Chinese was constantly looking for winners, Wozniacki was mostly waiting for her to make errors.

Wozniacki was coming off a two-and-a-half hour thriller late Friday against defending French Open champion Schiavone, which she won 6-4, 4-6, 6-3, and often looked sluggish under sunny conditions and 25 degree Celsius (77 Fahrenheit) temperatures on the Primerose center court.

Peng already had the momentum with her, coming off a convincing 6-3, 6-3 win against third-ranked Vera Zvonareva on Friday.

Yet in the second set, with her first title beckoning, Peng started to falter. In the third game she failed to convert seven break points and the momentum of the match turned.

Wozniacki immediately broke, shook off the fatigue and finally started playing like the world’s top-ranked player. She won the set on an ace.

But nothing was going to be easy.

After forcing a break early in the third set, Wozniacki looked in pain and asked for treatment.

She came back with tape around her left thigh and Peng soon broke back for 3-3 as Wozniacki no longer moved around court with ease.

But it was Peng’s time to falter, making the wrong decisions and putting easy balls wide.

Despite her medical problems, Wozniacki came through for her 16th title.