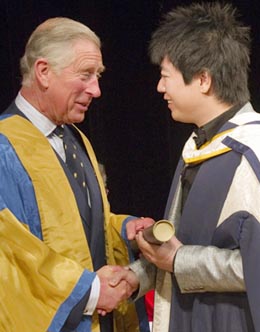 Britain’s Prince Charles presents an award to pianist Lang Lang during a visit to the Royal College of Music, in London Thursday. [AP/YONHAP]

LONDON - A hundred youngsters playing 50 pianos all at once may not sound like everyone’s idea of a musical treat, but it’s a sellout at London’s Royal Festival Hall this coming Sunday. Call it the “Lang Lang Effect.”

The 28-year-old Chinese piano phenomenon, who has brought pop-star glamour to the classical concert circuit, landed in Britain this week on what he says is a mission to bring music - both playing and listening - to a wider, younger generation.

“Lang Lang Inspires,” a six-day series of recitals and public events at the Southbank Centre, has also given audiences an opportunity to judge the musical merits of a pianist who has divided critics with his showmanship and prodigious technique.

Hailed by some as among the world’s finest, whose success has inspired millions of Chinese youngsters to take up classical piano - dubbed the “Lang Lang Effect” - others hear a lack of artistic sensibility beneath the dramatic keyboard skills.

A hard-graft childhood in industrial Shenyang, inspired at aged 2 by a piano playing cat in a “Tom & Jerry” cartoon and driven by a fiercely ambitious father, led to international acclaim and work with some of the world’s leading orchestras and conductors.

Five minutes of standing ovations and a double encore for a rapturous full house after Tuesday’s opening solo recital left little doubt of the adulation the spiky-haired maestro inspires among a fan base that extends far beyond the high-brow crowd.

The clamor for autographs and flashing of mobile phone cameras, the cries of “Wow” and “Amazing,” were all in an evening’s work for the young man The New York Times called “the hottest artist on the classical music planet.”

Some critics were less kind, conceding his dexterity and ability but questioning the artistic interpretation he brought to a program of Bach, Schubert and Chopin.

Ismene Brown, writing on the theartsdesk.com, saw a talent for publicity as perhaps the greatest skill of “this showman with his precious, kittenish phrasing and facial expressions” whom she called “the new generation’s Liberace.”

Yet even Brown also heard a moment of beauty: “Suddenly, in the 12th Etude ... for two minutes I was totally upended.

“Here, suddenly, was a little boy who’d practiced hour upon hour against the metronome, sweeping those huge arpeggios up and down the piano without cease. The furious technical challenge in which he found liberation for his soul pierced my heart.”