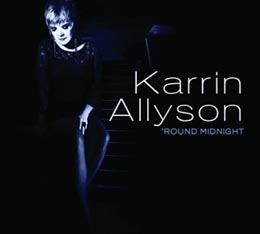 Allyson makes this album even more personal and intimate by handling all the keyboard parts herself for the first time on the 13 albums she’s recorded for Concord over the past 20 years. Her classical piano training shows in her elegant introduction to Charlie Chaplin’s “Smile.” Allyson’s musicianship is evidenced by the fact that she wrote nearly all the arrangements herself, starting with the opening “Turn Out the Stars,” slowing down the tempo of Evans’ tune to elucidate Gene Lees’ bittersweet, nuanced lyrics.