A house fit for a 21st century Heidi on show

A house fit for a 21st century Heidi on show 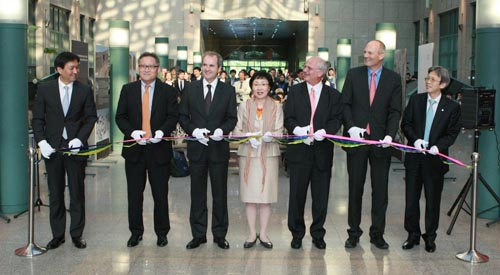 
As part of efforts to establish cooperation between Switzerland and Korea in science and technology, the Embassy of Switzerland held a photo exhibition about an innovative and eco-friendly guesthouse in the Alps. The exhibit is being held in conjunction with Yonsei University at its Sinchon campus in Seoul and runs through this Friday.

With its futuristic exterior design, the five-story New Monte Rosa Hut is located in the Swiss Alps at 2,883 meters (9,458 feet). It is covered with aluminum walls and has a wooden interior. Ninety percent of the energy consumed in the house is supplied by solar energy.

“In September 2010, the Swiss Embassy organized an event on the subject of green technologies that was called Swiss-Korean Science Days: Cleantech for Green Growth,” said Thomas Kupfer, the Swiss ambassador to Seoul. “And this event focuses on sustainable buildings.”

According to the embassy, excess solar energy for the house is stored in a special battery so that it can used on cloudy days. Water is provided from the melting glaciers of the Alps and then stored in a large reservoir located 40 meters up the hillside from the building. The guesthouse can accommodate a maximum of 120 hikers.

“Through this exhibition, visitors can see a new high-tech and environmentally friendly hut and what the future of architecture could be like,” said Yang Il-sun, vice president of the university. “The exhibition also shows the international cooperation between Switzerland and Korea in the future when it comes to the growing importance of sustainable and eco-friendly architecture design.” 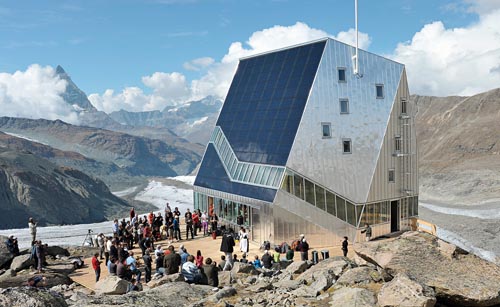 Hikers gather around the guesthouse in the Swiss Alps. Provided by the embassy


In an aim to bolster cooperation in science and technology, the Korean and Swiss governments signed a bilateral agreement in 2008 in IT, design sciences, energy and the environment. Since then, the two countries have held a “Swiss-Korea Science Day” and shared the latest research and studies on advanced technology, coordinated by Swiss Federal Institute of Technology in Zurich and the Korea National Research Foundation.

“Korea is one of the top priority countries for Switzerland in science cooperation,” the ambassador said in an interview with the Korea JoongAng Daily. “We are striving for cooperation with Korea in quite a large number of areas - energy, water, clean tech, biotech and more.”

Lee Jai-yong, dean of Yonsei’s College of Engineering, said, “Yonsei University’s Architecture Department professors and researchers built a four-story apartment that operates with solar and geothermal energy on the Songdo International Campus in 2010. The embassy was aware of Yonsei University’s interest in eco-friendly architecture and suggested we hold this exhibition.”