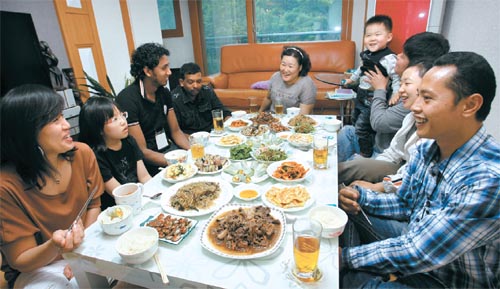 A group of migrant workers has dinner with Lee Hyun-sook, at her apartment in Myeonmok-dong, eastern Seoul, on May 15. The dinner was part of a program organized by the Seoul Metropolitan Government to help migrant workers adjust to life in Korea. By Oh Sang-min


The Seoul Metropolitan Government organized a one-day program that paired Korean families with migrant workers and their families in an effort to help these newcomers adapt to life here. Under the program, migrant families were connected with Korean families who offered to make dinner for them in their homes on May 15.

“We connected about 28 foreign workers who applied for the one-day program with seven Korean families who volunteered to make dinner for them,” said Jung Young-hwan, an official from Seoul’s Foreign Residents Assistance Division. “The families didn’t receive any funds from the government for the dinner. They prepared it themselves and each family hosted three or four foreigners.”

On the day of the dinner, Lee Hyun-sook, 48, welcomed two Sri Lankans, an Indonesian and a Korean-Chinese couple to her home in Myeonmok-dong, eastern Seoul, for a meal that included 10 Korean traditional dishes, including bulgogi, or marinated barbecued Korean beef.

“Since I opened an Asian food market five years ago, I have met many marriage migrant women and foreign workers in my store. Now, many of my friends are from Vietnam and they often visit my home for dinner,” Lee said. “I have friends who are foreign workers in Korea who have successfully started businesses here and I hope to introduce them to my five guests sometime in the future.”

She said she had just one regret about hosting the dinner.

“I feel a bit ashamed because I don’t know anything about Sri Lankan or Indonesian food,” she said.

That didn’t seem to bother Adul Hadil, 35, one of Lee’s Sri Lankan dinner guests who works in Gunpo, Gyeonggi.

“I enjoyed every dish she prepared,” Hadil said. “I felt the friendship of people talking with me face-to-face and I won’t forget their kindness. I was very happy at dinner.”

“We had this one-day dinner program in an effort to help foreign workers who don’t have any family in Korea connect with local residents who can help them adjust to life in Korea,” said Lee Jeon-young. “Based on this program, we will launch a mentor program in which foreign workers and Koreans can get together and share ideas about their life and work in Korea.”